In the aftermath of yesterday’s chaos, Nick spent today on the couch, fielding phone calls from everyone in the world and suggesting today was the day I take charge of his correspondence. No luck with that, so every 30 minutes he’s telling the same story. The cat seems to sense something is wrong, and has been his constant companion. I am helping by drinking all the wine.

We still had yesterday’s groceries in bags as I’d just shoved them into the fridge before running out to the ER, and since my only outing all day was  to get Nick’s prescription, I figured we might as well do Meatless Monday over.

We’ve been battling colds (it’s starting to feel like like we’ve always been battling colds), so soup was what we wanted yesterday, specifically hot and sour soup, and to be able to eat within fifteen minutes of arriving home after a long day. I picked up some fat white mushrooms and some crisp-looking bok choy, and couldn’t wait to eat. 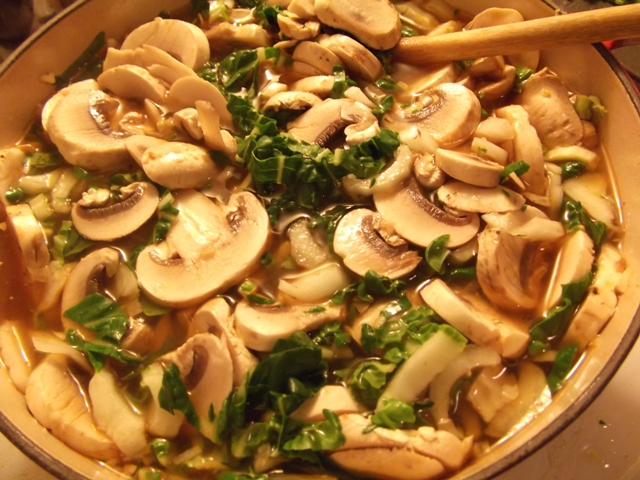 You could use cabbage, if that’s what you’ve got, or any leafy green thing you have on hand. The point here is ease while still making a dinner that’s somewhat interesting. This is a short-cut version of the kind of hot and sour soup I’d have delivered if it didn’t take so little time to make, a soup that captures the gist of what I’m after when I’m after salt and spice and tang, and it makes enough for four to six people. This is the basic recipe, but if you like it hotter, or sourer, or if you prefer a bit of lemongrass, or chicken or pork instead of tofu, there’s room for creativity and adaptation. 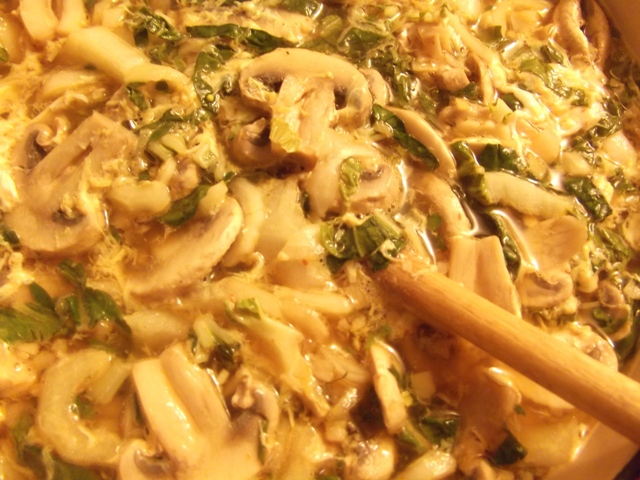 In a large, heavy-bottomed pot over medium-high heat, cook garlic and ginger in sesame oil until fragrant. Add soy sauce, vinegar, sriracha, and honey, and stir to combine. Let simmer one to two minutes, until reduced by a third. Add stock.

Bring to a boil, then reduce heat slightly so that liquid comes to a simmer. Add tofu, bok choy, and mushrooms, and let cook three to five minutes, until bok choy has wilted. Taste, adjusting seasonings as needed. I used homemade stock, so I had to add a little bit of salt. If you’re fighting sniffles, a little more hot sauce might be a good idea.

Stirring the liquid in the pot, pour the egg in a steady stream, swirling the liquid so that the egg forms many strands. If you don’t keep the liquid moving, the egg will form an unappetizing-looking glob.

Serve immediately, garnished with bean sprouts, scallions, and cilantro as desired. I bring out the bottle of sesame oil and the sriracha as well.