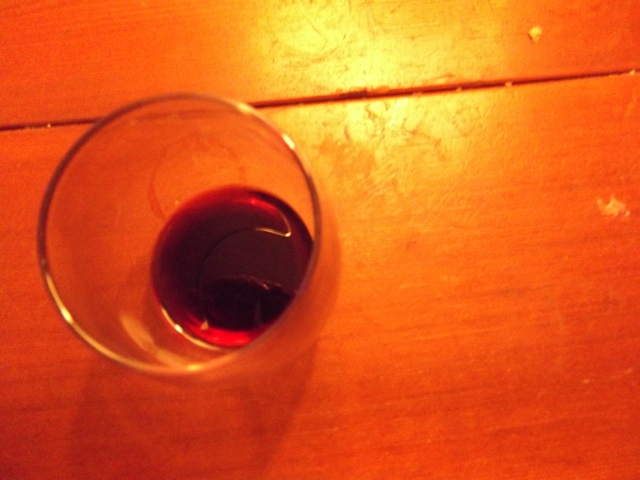 Finally, a glass of wine. It’s been one of those days.

It started late, with a groggy phone call and the realization that the results were in for the Canadian Food Blog Awards, and that somehow this blog had won the People’s Choice category. I made plans to write a thank you/Meatless Monday post in the evening, and then we threw ourselves into action. I have the week off, and Nick took the day off work to get some blood tests he’d been putting off since November (Too busy! Always so busy!) and to check in with his adviser at UBC. I had a meeting with a designer related to some work stuff, and at some point I’d have to make stock and test a soup recipe for Meatless Monday and maybe tidy this perpetually messy apartment and do some laundry. It all seemed doable, and around 4:30 we’d done everything we needed to do errand-wise and I had a bag of groceries in hand that would form the basis for dinner.

And then the doctor called, because Nick’s glucose levels were alarmingly high. And he was told to get himself to the emergency room RIGHT NOW and fortunately we live five minutes from Vancouver General. When we got there, they processed him quickly, which was suspicious because that never happens in Emergency unless it’s, like, an emergency.

These past few weeks I have been my own number-one priority, and Nick has been excellent support during this month of talking about me. With work so busy, and wanting to get into grad school, and blog contests and writing contests and recipe contests, I have been self-absorbed beyond what is ordinarily reasonable. And Nick hasn’t felt well, but he assumed that he probably had some seasonal thing and that he was just worn out, the last months of 2010 having drained him – they were frantic. And I assumed that he knew what he was talking about, and figured we probably both just needed fewer glasses of wine and more exercise and to go to bed on time.

There are several really good reasons why we are writers, not doctors.

At 6:30 he was on a bed in the ER wearing a blue gown and ankle socks, having just given up his second batch of blood for the day. The doctor spoke slowly and simply, and said that there would be tests, and that we would be there awhile. There was talk of Nick being monitored overnight, and then a nurse gave him a tuna sandwich and a cup of pink yogurt and his levels were still high but closer to not-terrifying. We waited, played hangman, and tried to ignore the ominous sounds in the hallway and the constant swish of cotton pants and squeaking of rubber soles and gurney wheels. I told several hilarious jokes and Nick’s dad drove all the way in from Surrey.

Nick is mostly fine, and will survive. They let him go home for the night, and he is sleeping. We ate a small, healthy dinner, and tomorrow he will make an appointment with an endocrinologist and pick up his prescription and in a little while we will know what is wrong.

What timing, I keep thinking, and I’m glad that he finally set some time aside for the blood tests, and that they caught whatever it was before something devastating happened. In the grand scheme of things, he will be okay – please think happy thoughts for him, as I kind of like him and have just gotten used to having him around.

I am also relieved to have put my own madness into perspective. If all my dreams don’t come true in the first week of February 2011, there will still be lots of time. And in the meantime, it’s flattering and humbling to have this collection of recipes, stories, and bad photos passed around and voted for. If I did not have such stubby T-Rex arms I would hug each of you at once.

Thank you for your support and happy thoughts and witty comments and enthusiastic offers of blog linkage. I have secretly loved all the attention.

And I promise, tomorrow we’ll be back to our regularly scheduled programming.

12 thoughts on “Thank you again. And now I need your happy thoughts for someone else.”