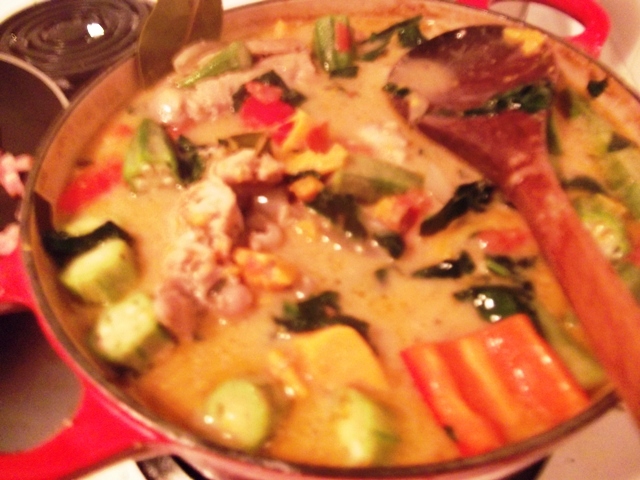 A friend and I once took a Caribbean cooking class through the Vancouver School Board’s Continuing Education program. I had taken other classes through the same program and they were all taught by professional chefs and I learned some fabulous things, including recipes I still use on a regular basis, so I thought the Caribbean class would be equally useful.

When we got to the first class, the instructor was wearing a lot of red lipstick, some of it on her lips, and a T-shirt printed with a picture of her face. She was no longer allowed to sell her herbs and spices in class – the school board forbade it – so if you wanted to come out to her car after class, she’d sell you spices in Zip-Loc bags. I can imagine how it would look, buying a baggy of dried thyme from the trunk of someone’s car in a south Vancouver high school parking lot, but I guess that’s how she supplemented her income; she would mention her spices two to three times, every time.

She also ran a catering company and would deliver your Christmas turkey or Hanukkah feast, and taught she taught basic cookery to children (I was once handed a recipe for a spaghetti dessert involving raisins, cottage cheese, and cinnamon – I think it was supposed to be Noodle Kugel, but it missed the mark … a bit). The course was four classes long and basically one giant commercial. And the food was terrible.

What I did get out of the class, aside from a Certificate of Attendance and a desire for my own face on a T-shirt, was an introduction to some of the basic flavour combinations that comprise Caribbean cooking. What follows is a version of Caribbean Pepper Pot, which I was introduced to in that class, but which has evolved into something less complicated but infinitely more complex.

It is mildly sweet, as spicy as you want it, and full of autumn veggies, which makes it a cozy dinner that’s lovely this time of year. I hope you’ll try it. And no need to follow me out to my car afterward.

Heat the oil in a Dutch oven or other large, heavy-bottomed pan over medium-high heat. Add chicken thighs and brown each side. Remove from pan and set aside.

Add onions and garlic to the pan, scraping up any chicken bits from the bottom. Add bay leaves, brown sugar, thyme, allspice, and cinnamon. Cook until fragrant.

Add okra, red pepper, and kale and simmer for an additional 10 to 15 minutes, until okra is soft. Stir in cilantro. Taste, adjusting seasonings as needed. Remove pepper and bay leaves. Serve with rice.