Oh, Meatless Monday. If you fell on any other day, I would have a much easier time. Around 2:00 this afternoon, I was pretty sure we were pretty much going to have grilled cheese sandwiches for dinner. But the thing about having a food blog is that at least a couple of times each week one must make an effort to eat something interesting, or, at the very least, to pretend that she hasn’t been eating an inordinate number of sandwiches, because eating only sandwiches won’t help anyone out of any rut.

This happens every so often, usually during the longest-feeling part of a season when I really just don’t feel like eating whatever’s in season any longer. At the start of winter I cannot get enough root vegetables; by the end of February, the rose in my cheeks isn’t the brisk arctic air but too goddamn many beets. There will be radishes soon, and asparagus, and pea shoots, and peppery little leaves of watercress. I have never been particularly patient.

Also I don’t like the cold, and I am bored with my puffy jacket, and all my boots need to be resoled. Whine, whine, whine. It’s possible that I am laying blame for my rut on the weather and the root vegetables when the problem is me. Nick has indicated that’s likely the case, and that I am a malcontent at my worst, and contrary much of the time. I maintain that I’m charming and delightful, but he did not nod in agreement.

So because we cannot live off of grilled cheese alone, winter vegetables will have to do for now. And why not coax the best out of them?

I first heard about mujadara from Orangette. For the uninitiated, mujadara is a simple dish of rice and lentils bound by the rich sweetness of deeply caramelized onions. Made from pantry staples, it’s comfort food for a dark grey day, and the constant sizzle of onions for close to an hour is soothing, and you can eat it with a side of greens dressed in a squish of lemon and it’s really very nice.

But why stop there? Why not pull out that celery and those carrots that have been languishing in the crisper? Why not add a touch of smoke, a pinch of vigour? Yes. Pinçage. Let’s do that. Here’s a variation on the mujadara theme, a twist that will placate those dull feelings until the first tips of asparagus finally grace your plate.

Rice and lentils with pinçage

(Serves four, or six as a side dish.)

In a medium pot, combine rice, lentils, bay leaf, one tablespoon of olive oil, and one teaspoon of salt with four cups cold water. Bring to a boil over medium-high heat, then reduce heat to low, cover, and cook for 20 minutes. Remove from heat and keep covered.

Meanwhile, heat three tablespoons of olive oil in a large pan over medium high heat. Add onion, carrot, celery, and apple, and cook until onions turn translucent. Turn heat down to medium, and cook slowly, stirring occasionally for 30 minutes to an hour, however long it takes your ingredients to turn golden and soft. Add salt once veggies begin to brown. I let mine go until they’re barely recognizable as their former selves, until they are dark and black in bits and they smell sweet and faintly smokey.

Add the garlic and the tomato paste, allowing it to dry to the bottom of the pan but not to burn. Keep it moving, tossing the veggies to coat in the sauce. When you’ve reached this point, you’ve got a pinçage (although technically a real pinçage wouldn’t have apples in it … technically, shmechnically). 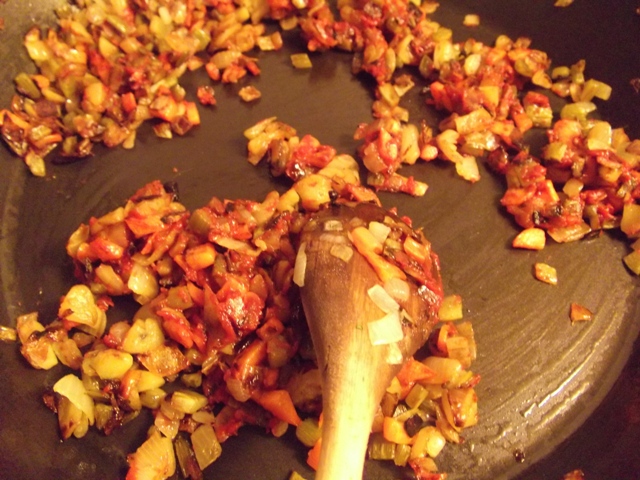 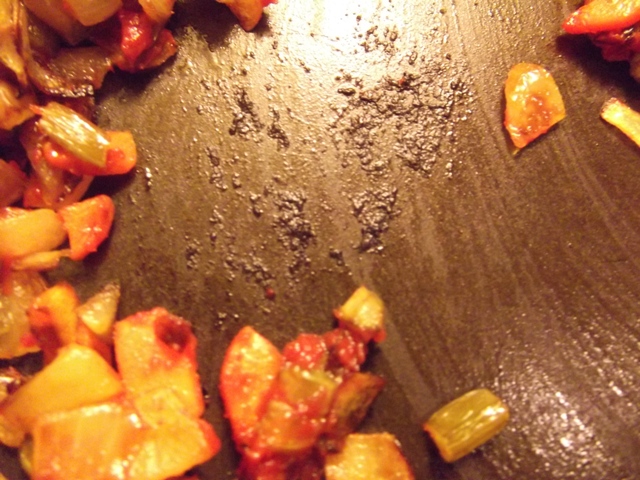 When the bottom of the pan looks pretty dry, add rice and lentil mixture (removing bay leaf). Pour about a cup of water into the pan to deglaze. Doing this will release the flavour of your pinçage into the rice, coating it saucily. 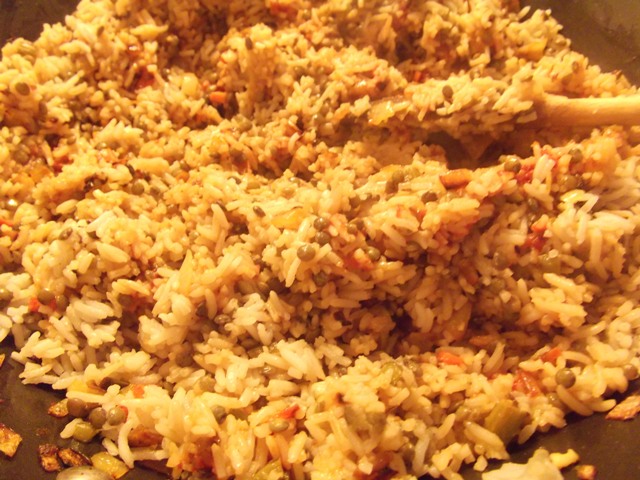 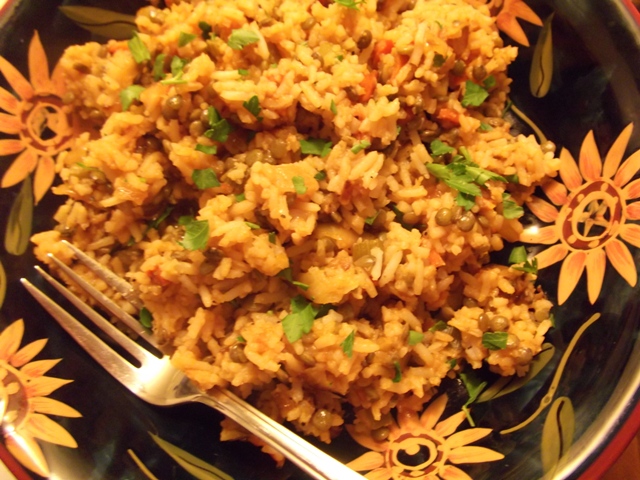 6 thoughts on “Something like mujadara, only French, kind of.”