We’re getting to the best time of the year now. The tomatoes that were so bright and lovely a few weeks ago are now mottled and sweet, and they beg to be roasted low and slow or stewed down for sauces, and since the air outside has cooled a bit I have no reason not to but oblige them. On Alana’s advice, I roasted a whole bunch of field tomatoes last week and stuck them in the freezer, but I still had a few romas, a hankering for bread and cheese, and a resurgence of old lady disease in my limbs, hands, back, and left big toe that made me not want to put in a lot of labour.

This post is mostly pictures, because I made my focaccia bread for the crust (all the ingredients up to the flour, plus salt – the recipe will make two pizzas if you’d prefer not to make one gigantic one), made pesto for the sauce, and roasted tomatoes for hours and hours to put on top. And then cheese. It’s also short because we made a trip to the garden … let’s just say this is a two-post night. (I know. I’m excited too.)

The aroma in the apartment was amazing, and a valid argument for always working from home. Tomatoes develop a sweeter taste as they roast down, but they smell almost meaty, with a lusty musk that is distinctive to this exact moment in the tomato season. Capture it while you can. 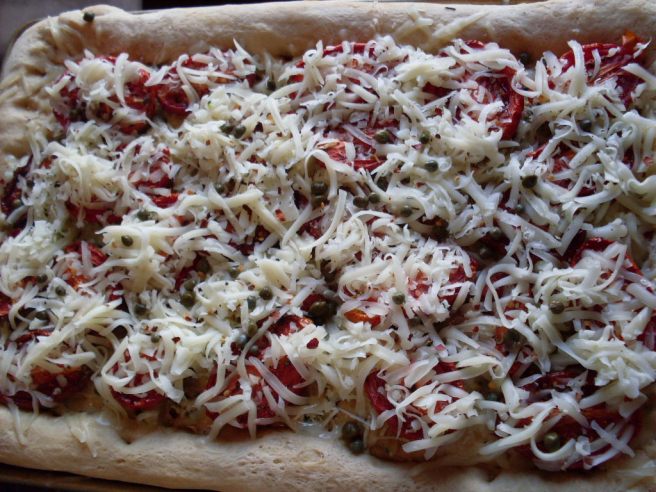 You can see how the light changed as the hours past while the pizza slowly came together. The focaccia crust isn’t the sort of thing you’d make on a weeknight ordinarily, but if you’re in no rush it’s perfect for homemade pizza.

There’s a lot to be said for homemade pizza, whether you dawdle over homemade, buy the dough from your favourite take-away place, or just get frozen dough from the grocery store. The advantage to using dough over a premade crust (other than not having to eat something that pretty much tastes like cardboard and has weird speckles of what you kind of recognize as “cheese” all over the thing) is that you get the smell of baking bread, which is the best thing about pizza, aside from all the cheese. Use whatever cheese you like, but (and this will seem completely out of character) I prefer low-fat mozzarella, because it’s stringier and I like my pizza cheese stringy.

The other thing about making your own pizza is that you get to put whatever you like on it, and you don’t have to feel crushing disappointment when Domino’s puts green peppers on anyway even after you told them how much you hate them. So, you get the satisfaction of the smell of bread baking, as much cheese as you want, whatever toppings you want, and nobody cries because there are green peppers.

And if tomatoes aren’t your thing, you should try this in October with butternut squash, rosemary, roasted garlic, and Gruyere. Holy crap, it will change your life. Try it and get back to me.