After a rather indulgent weekend I felt more than a little hard done by, repentantly enduring my hot whole grain cereal with almond milk on Monday morning. Usually that’s a breakfast I enjoy, but after the delights and feasting of Saturday and Sunday, it felt a little bit like punishment, or like the shakiest part of withdrawal. Sure, it was good for me. But there was no zing, no glorious gluttony high.

So last night, with the dry air suggesting the perfect time to whip egg whites into a glossy frenzy (not a drop of precipitation in all of July so far!), I made six brown sugar meringue shells, and this morning filled them with pink, local yogurt and juicy Okanagan cherries, and felt enough zing to last the week, and all of the high with none of the actual gluttony. One meringue shell is significantly fewer calories than a slice of toast, with none of the kneading and hardly any real effort to prepare.

If you care about that sort of thing.

Which I do not.

The recipe is adapted from a recipe I posted in the fall, from Saveur (such a messily dressed pavlova), with the only difference being that I halved the recipe and used brown sugar instead of white. The recipe assumes you have a stand mixer; if you don’t, the time it takes to whip the whites will be a bit longer. I’ll let you know how you’ll know when the mixture’s done.

Meanwhile, make a slurry of the cornstarch, vinegar, and vanilla. When egg whites stand up on their own and do not fall when shaken, whisk in the slurry and beat for another five minutes, until peaks are smooth and shiny.

Using the top of a one-cup-size ramekin, trace six circles onto a sheet of parchment paper that is just a bit smaller than a baking sheet, leaving an inch between each circle. Turn the parchment over, and divide the meringue evenly between the six circles. It’s okay if there’s overlap. Gently press a dip into the centre of each one, building up the sides a bit so as to form a shallow bowl.

Place in the oven, and immediately reduce the temperature to 215ºF, and set the timer for 1 hour and 15 minutes. Do not open the door at any time. When the timer goes off, leave the meringues in the oven to cool overnight, or at least three hours. Remove the meringues to a sealed container and store in a warm, dry place. Do not refrigerate.

Serve meringues with yogurt and fresh seasonal berries. If you’re using cherries, pit them the night before and stick them in the fridge, covered with plastic wrap. Feel good about breakfast. 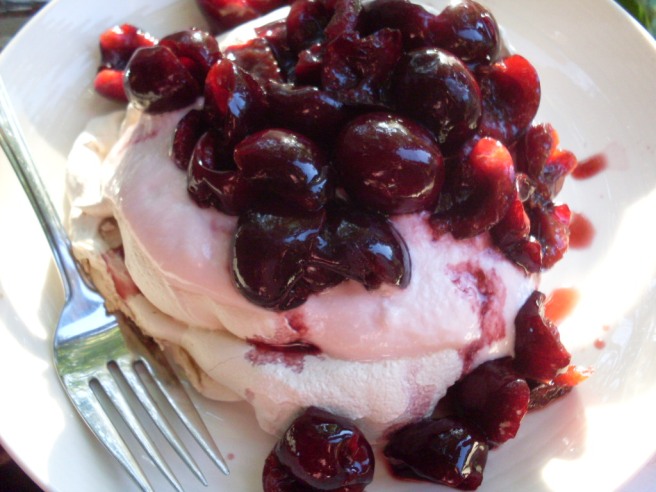 I should mention that if you’re used to something heartier, this is not terribly filling – if you’re a bacon/eggs/toast enthusiast, use this one at brunch with lots of other things. But if you’re a fruit and yogurt fan, like I am, this will be plenty sufficient to get you through the morning.

Also, I told you I’d tell you about blueberry crisp. I haven’t forgotten. I just get distracted so easily.

2 thoughts on “Meringue held up my fruit and yogurt this morning, and thus Tuesday was vastly improved.”