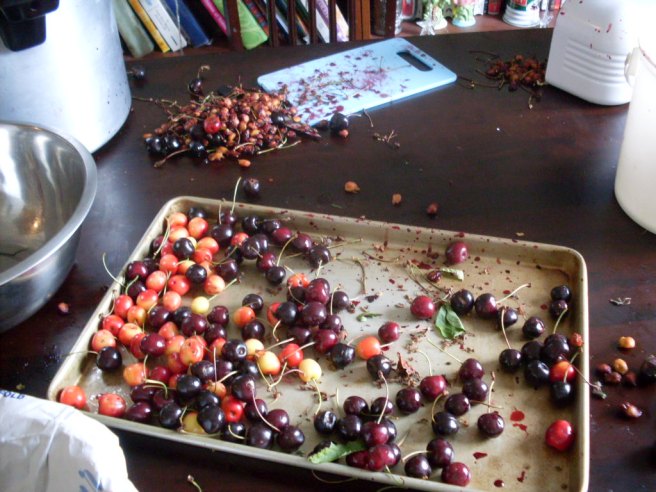 This year, the cherries returned in abundance! I think we must have gotten to them a little later this year, because by the time we arrived the cherries on the main tree had darkened until they were almost black. They had a caramel taste to them, and they begged me to eat so many of them, and I did.

What squishy feelings come from eating too many cherries all at once.

They became jam, sort of, and a lovely dark sauce for steak, and a tart that sparkled like something much more valuable than the sum of graham crackers, cherries, sugar, and rum.

I even tried to paint one of them. Tried being the operative word, and maybe my evil beast of a high school art teacher was right – I don’t apply myself or seem to care, and all I’ll ever have is wasted potential, especially with this attitude. 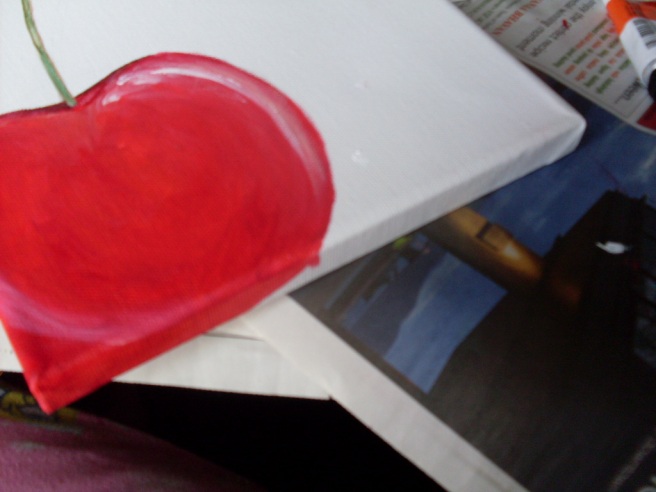 But what did she know, anyway? I really, really care about cherries.

There aren’t really recipes for any of the dishes that wound up – there is for the jam, and it comes from David Liebovitz, and even he claims there’s no real recipe. Mine didn’t set, which is just as well, because now I have six jars of cherries in a rich rummy caramel, and that’s just fine. They will be lovely in ramekin-sized cobblers come Christmas. 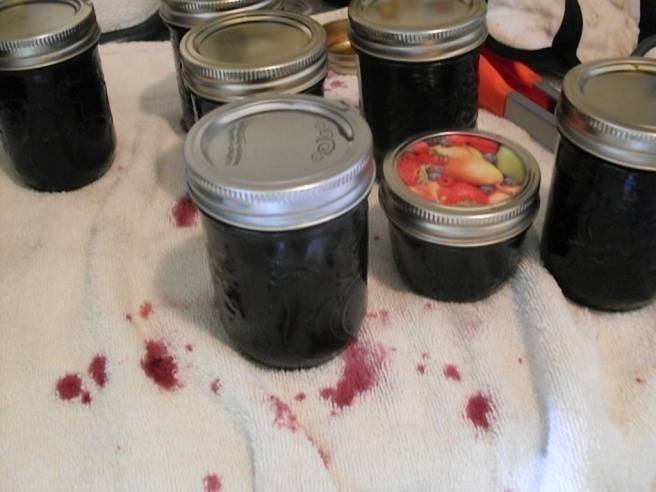 And the steak. You ought to know all about this. 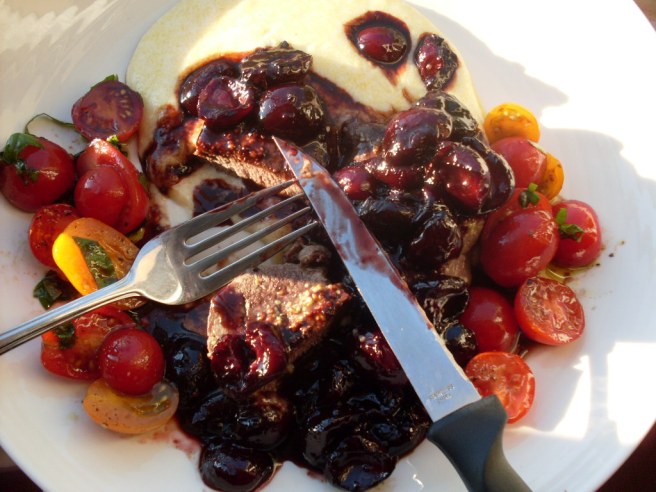 When you pan-fry a steak, right after you move it to a foil-covered plate to rest, while the pan’s still hot, dump a cup of cherries per person into it, let them melt into the meat juices, and when the pan looks dry, deglaze with a splash of balsamic vinegar. Add chili flakes if you feel like it. You’ll know when it’s done – the sauce will be sticky, not runny, and will smell fantastic.

And the tart. There’s nothing to the tart.

Macerate two pounds or so of cherries in about a half a cup of sugar  and a quarter cup of your favourite rum or bourbon, and give it 30 minutes, or 60 if you’ve got ’em. Bourbon’s better, but sometimes you’re out because it’s hot and you like bourbon and lemonade almost better than anything in the world, and my goodness your liver must be tough. Is it hard around the edges? Fine work. Really well done. What?

Tart. Take a tart pan. Pack it full of one cup graham cracker crumbs mixed with a quarter cup of melted butter and two tablespoons of brown sugar. Bake at 400°F for ten minutes. Remove from oven, and cool.

Fill with cherries. If you have a lot of liquid, thicken it on the stove with a bit of cornstarch. If you don’t, that’s fine too. I just poured it back over the cherries.

Serve immediately to salivating guests. Pile so much whipped cream on top.

Tomorrow I’m going to a blueberry festival at work and should have a flat or two to do something with, and then Grace and I are going on a pink wine picnic followed by berry picking on Sunday. So much excitement! I can’t wait to tell you all about it. But for now, think about cherries. I still am. If for no other reason than they’ve permanently grubbied my fingernails and I’m painfully self-conscious about it.