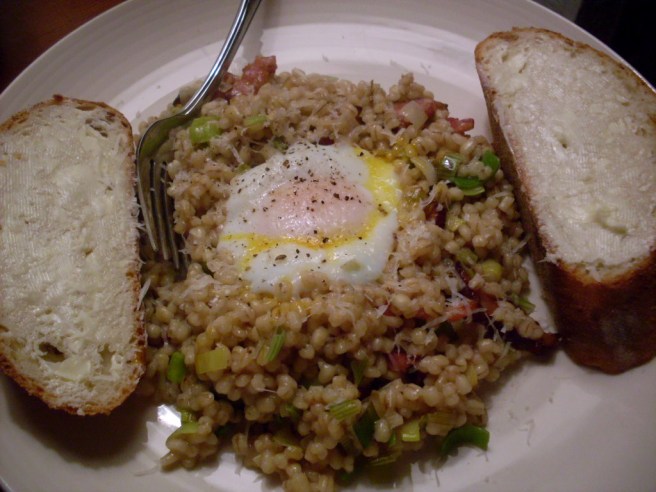 We went to Las Vegas this past weekend, for the very first time, and it was wonderful. We ate nothing but meat and drank nothing but beer and Bloody Marys for three days, and though our bodies are suffering, our minds are at peace, the stress of our daily lives forgotten as we pissed away our American dollars and gorged ourselves at the meat buffets.

The hard part is getting back to our lives as usual. Early bedtimes and dinners with vegetables are the order of the week. Tonight was grain night, and half of a one-dollar bag of barley formed the basis for dinner.

The following recipe makes enough for four to six as a side dish, or two to three as a main. It will double very easily. We ate it as a main, topped with a poached egg, and there was a bit left over. It’s a hearty alternative to risotto, as barley is a whole grain rich in both soluble and insoluble fibre, which means that it’s a great way to recover from a vacation in which you ate nothing good for you.

In a large, heavy-bottomed pan, sauté bacon until crisp. About one minute before the bacon is ready, add the leeks, and sauté until glistening. Remove from heat and drain onto a plate lined with paper towel.

Drain the bacon fat, but don’t wipe the pan. Add olive oil. Return the pan to the stove, set to medium-high heat, and pour in barley. Stir fry barley and garlic until golden and toasted, about two minutes. The barley will smell toasty and will turn white before it browns slightly. Stir in the wine, and reduce to medium heat.

Once wine is absorbed, pour in one cup of stock. Stir frequently until stock is absorbed. Repeat two to three more times, over thirty to forty-five minutes, until barley has puffed and softened; you will want the texture to resemble al denté rice, slightly chewy but pleasing to the bite. 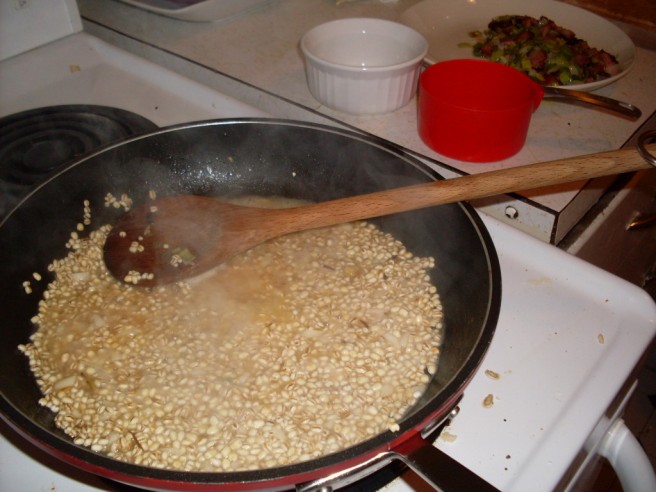 Once almost all of the liquid is absorbed, add bacon and leeks back to the pan, and cook with the barley. You’ll want the liquid to have almost completely disappeared. Once this happens, remove from heat.

Stir in butter and Parmesan cheese. Season to taste.

This is salty, cheesy, nutty, and thoroughly delicious, with just the right amount of chew and softness to make it the perfect comfort food to follow a weekend of gluttony, or just a hard, long week.