Tonight is a quiet night, the end of the last day of a three-day work-week, and I cannot be bothered with even pajama pants – it’s been muggy lately, with over 50% humidity (all showing in my hair), and the forecast is calling for fire and smoke which I suspect means the apocalypse is nigh and I’m not even worried, just impressed, because I thought that sort of thing was supposed to defy prediction.

In other news, run-on sentences are still not something I edit out of my own writing. Apparently.

So tonight we had one of those easy meals that looks cool, because I wanted Nick to clean the apartment and I figured he would have to think I tried to be conned into that ugly a task. Salt-crusted salmon and roasted patty pan squash did the trick – it’s even pretty rad to say out loud, and apocalypse or not, I think I’ve earned the right to assign him floor-washing. Interestingly, it’s never my turn for that. This is why being married (to almost anyone but me) is better than living with a roommate.

The recipe is not so much a recipe as instructions to “coat salmon in salt and bake,” but the idea comes from Martha Stewart, who makes me mad (and feel inadequate) because being Martha Stewart-fabulous is way more effort than I am willing to put into anything and is also very expensive, but she has a good idea with the fish. Except, her recipe calls for an eight-pound salmon and, like, 12 pounds of salt, and I have no idea how the salt is supposed to stick to it. I want a crust, Martha. Not wispy little salt flecks flaking off at the wrong time.

Just make my fish. My lifestyle is one you can emulate for very little money or effort (don’t even bother with pants after 5:00 pm). Though not emulating it may actually make you feel even better about yourself, and self-esteem is a good thing.

In a large bowl, combine salt, eggs, and the zest of two limes. Mix very well.

Line a baking sheet with parchment, and lay about a third of the salt mixture in the centre to about the length of the fish, and a little bit wider. Pat fish dry, and lay on top of salt.

Slice limes, and stuff into the cavity of the fish. You can add scallions or other herbs here too, if you like and if there’s room. Pack salt over top of the fish, pressing to ensure salmon is securely covered.

Bake for 30 to 35 minutes in the centre of the oven. Let rest five to ten minutes before serving.

Remove salt carefully so as not to damage the fish. The skin should mostly come off with the salt, but if it doesn’t, don’t panic. It will peel off easily enough. 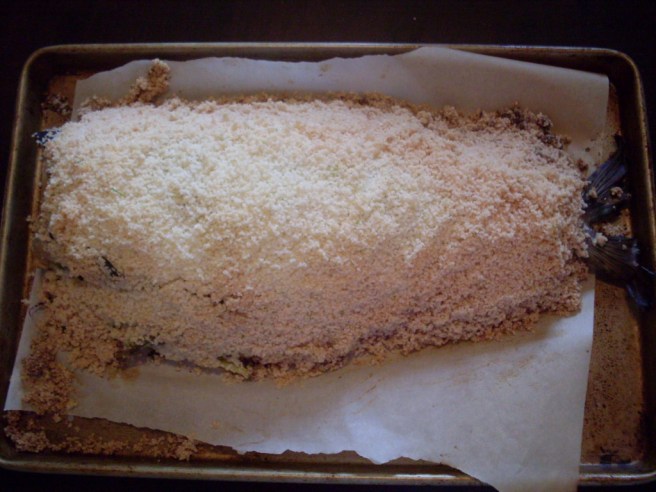 Serve to an adoring special someone or other someones who might also wash your floor, and delight in how awesomely easy this is, and yet how cool and innovative it looks. You will find that despite the SIX CUPS OF SALT, it’s actually not salty at all. It’s pleasantly seasoned, with just a hint of lime, and the result is fish that’s moist without the addition of any extra fat. If you used herbs or something otherwise aromatic in the fish, I think the flavour might be a little bit stronger, but I didn’t think it was necessary. Enjoy (even during the apocalypse)!

6 thoughts on “Salt-crusted salmon with lime.”

Vegetables and a lecture on Minecraft that no one can escape from.
Sorry, I just can’t get video calling to work, not sure why.
From #DutchFeast (available @arsenalpulp and many bookstores!), eggplant with tempeh (shout-out @tempeafoods!). “Will your unruly son eat that?!” <BATMAN VOICE> HE’D BETTER.
STUFF ON EVERY SURFACE.
I’m just trying to maintain a standard of living over here.
Vegetables for breakfast. Health first, you know?