Dutch food is often comfort food, and as such, much of it is boiled to mush and then mashed and occasionally sugared in some way. Mush and sausages features heavily in the Dutch cookbooks I’ve acquired over the past year, and while that approach to cooking is not without its merits, there’s only so much mushy stuff I can pass off as dinner around here.

And so, Hete Bliksem. Typically, this dish is a mash of potatoes and apples with bacon or ham, and sometimes pears or onions, and it’s sometimes served with stroop, a kind of Dutch syrup. There are an infinite number of variations on this, from the very high end to the very simple. My variation falls somewhere in the middle, with an updated approach to the cooking so that the dish will stand alone as well as it would alongside a plate of sausages or roast meats.

It makes thrifty use of bacon fat and stuff you’ve probably already got in your fridge and pantry; I’d like to think the Dutch, or at least the less stubborn among them, would be pleased. 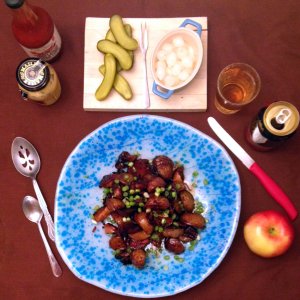 In a 12-inch cast iron or other oven-transferable pan over medium high heat, cook bacon until it is very crispy and all the fat has rendered, about six minutes. Scoop the bacon from the pan and onto a plate lined with paper towel, and set aside.

You will need about three tablespoons of fat in the pan; if you don’t have another, add up to another tablespoon of fat, either bacon fat or olive oil. Add potatoes and apples to the pan, sprinkle with salt, and toss to coat.

Roast apple and potato mixture for 60 minutes, flipping midway through the cooking process.

About 10 minutes before these are done, add apple juice, molasses, allspice and pepper to a small saucepan. Bring to a simmer and cook, stirring frequently, until reduced by about half  – it should be about the consistency of maple syrup.

Add cider vinegar and mustard, and set aside.

Remove the potato and apple mixture from the oven. Sprinkle with thyme and reserved bacon, then pour apple juice reduction over top, stirring to coat. Serve in the pan, or spooned onto a serving plate, and garnish with chopped scallions.