For the past two weeks, this household has been in the sick of things, each of us weighed down by an assortment of pains and ailments, from migraines and colds to flus and sinus infections. I wish I could say that I have taken charge of our healing by simmering wholesome and restorative meals rich in love and nutrients. That would have been nice of me.

Last Wednesday the sick was so bad I skipped lunch and napped under my desk for an hour. The next day I took a sick day, and by the weekend I was sure I was going to die. I begged Nick to smother me, and when he wouldn’t I chastised him for not taking advantage of the out I had offered him. I tried to smother myself but the cat thought we were playing a game and ruined it.

By Monday this past week I was certain I had cracked some teeth coughing, so I made a dental appointment. The good news is the teeth are fine; the bad news is my sinuses are pretty angry and infected. The worst news is that my wisdom teeth are pretty much one with my skull now but they have to be removed so it sounds like it’s bone-saw time. That’s the worst time!

2013 has not been off to a good start. And now that I have managed to attain a functional balance of NyQuil, antibiotics and codeine, the baby has finally succumbed and is fevered with a face full of ick.

It’s times like these when I can’t fathom coming down off my prescription and cough syrup high to go to the grocery store. We are out of eggs. And we had a late night. So somewhere between rescuing the little guy from a coughing fit and the two of us passing out in the dark, I whisked together some flour, water, yeast, honey and salt for pancake batter. If all three of us woke up in the morning, we would have pancakes. It would be a kind of reward.

This recipe makes 6 pancakes, and will serve between two and three people, depending on how hungry you are, or how much bacon your version of Nick decided to make. I like these topped with berries, or with chestnut cream. Because they are more like fried bread than flapjacks, you could take savoury liberties with them – try them with sour cream and apple sauce, or with cottage cheese and thinly sliced scallions, if that pleases you.

Whisk ingredients together in a bowl. Cover the bowl with plastic wrap, and stick it in the fridge overnight.

30 minutes to an hour before you’re ready to cook, take the bowl out of the fridge and let it rest at room temperature. Heat the oil and butter in a large pan over medium-high heat.

Gently spoon your pancakes into the pan, taking care not to stir the batter. Cook until edges appear crispy and bubbles form through each cake, about two minutes. Flip, and cook an additional two minutes, or until golden and puffed.

Serve hot, with a compote of berries, or maple syrup, or sour cream and apple sauce. 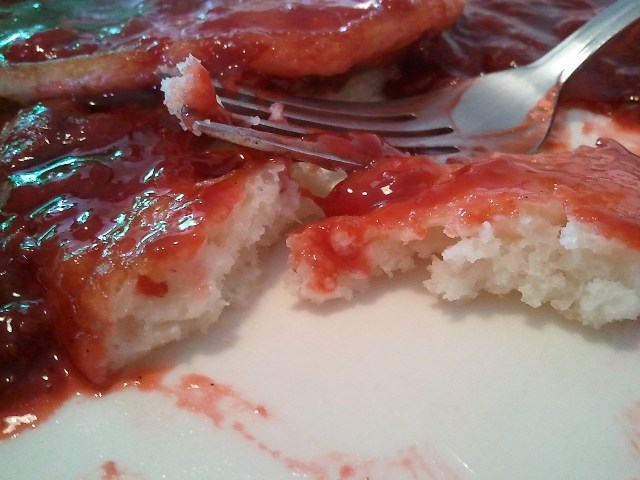