The longer you have babies, the more you need wine. Mine is an accidental hurricane, a destructive force of nature seemingly bent on exploring and subsequently breaking all my things. That this is going to happen to someone I know is very comforting.

And so my friend is almost there, and because one only needs so many onesies, I had said I would make her freezer meals in lieu of a shower gift. So I have been plodding along, making a container of something here, and a pot of something there. Tonight I added one more to the freezer, a pot of ham and white bean stew, a creamy, savoury combination of leftovers and slow-cookery.

I left the stew in the Crock Pot to cook for ten hours today, and when I came home this place smelled like salty meat and garlic and herbs; using just a few bits and pieces, there was enough hearty stew for at least eight people, I’m sure of it. It’s not beautiful, but it’s delicious, and plenty soothing for someone with a newborn and the imminent danger of having all her favourite stuff smashed by a happy little Hulk.

The night before you plan to eat, cover one pound of white beans with an inch of water.

In the morning, drain and rinse your beans. Put them into a slow cooker, along with ham, onion, celery, pearl barley, stock, mustard, rosemary, and bay leaves. Stir, cover, set slow cooker to low, and cook for 10 hours.

Go to work, or about your day, or back to bed.

When you get home, stir in pepper, Parmesan, and parsley. Taste, and add lemon juice and salt as needed. Serve with bread. Feel virtuous. 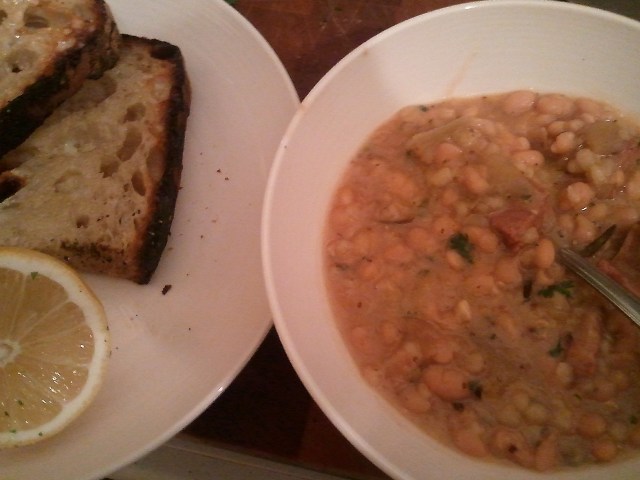