This weekend we finally had a moment to spare, a few minutes to sit down and breathe and look at the baby, who’s now pulling himself up on things to peer over them, and who suddenly switched from picky to pleased when it comes to the food set before him.

I don’t know where the time went. I have a job now, one I think I’m going to really like and not just because of the office’s close proximity to cheap bibimbap and fresh-baked cinnamon buns. Creditors are starting to get paid. I might even buy a pair of shoes.

We lost summer and fell into autumn, and, semi-concerned about potentially starving come winter should no job ever materialize for me, I spent most of the cusp of two seasons pickling and preserving, putting up jars of tomato sauce, pears, applesauce, jam, and jar after jar of hot peppers and pickly things. I made soups and stews for the freezer, bought cheap produce direct from the farm and inexpensive cuts of meat from the butcher, and ran out of places to store food. If I were an animal, I’d be the noble hamster. 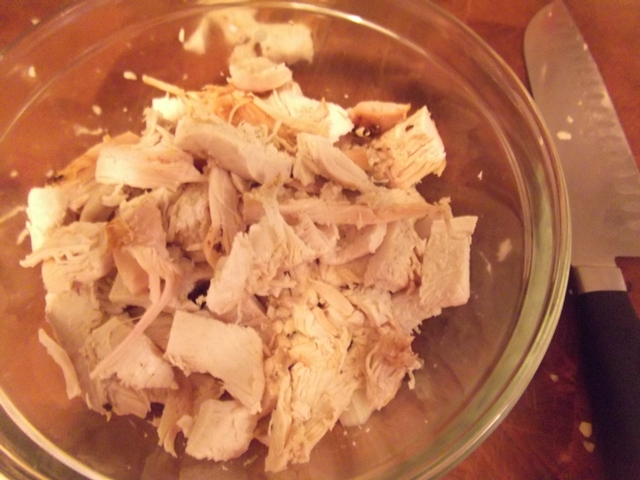 Last weekend was Canadian Thanksgiving, so we also had leftover turkey to make the most of. Bored with the idea of turkey soup and having had too many turkey sandwiches, I decided a pot of chili would give new life to the leftovers and keep us in lunches for the next few days. It’s a white chili, because some of us have eaten our body weight in tomatoes lately. The best thing about this recipe is that it calls for green chilies, but because I was at work and we only had fresh peppers, I had to ask Nick to roast them and peel them for me. And he did it, perfectly. The baby is crawling and standing, I’m back to work, and Nick is roasting chilies, and everyone is a better version of himself than even just a few weeks ago.

Turn your oven’s broiler to high, and place whole chilies directly onto the rack, under the heating element. You’ll need to stick close and watch them so they don’t burn. When skin is charred and blistered on one side, turn 90 degrees. Continue until all sides have blackened and blistered. Place in a glass container with a lid, and set aside for 10 to 15 minutes. Gently rub skin from peppers – it should slough right off.

In a large pot over medium heat, brown bacon until crispy. Remove from pot and drain on paper towels. Add olive oil. (Fat is delicious.)

Chop your peeled chilies, and add these to the pot as well.

Add flour and cornmeal, and stir until the mixture coats your veggies. Add the turkey and the cooked bacon, then the stock and milk. Stirring frequently, bring to a boil.

Add corn, and simmer for an additional 5 to 10 minutes.

Serve topped with the green part of the scallions, chopped, and grated cheddar cheese.