By mid-morning, there was chaos. The baby has been sick and only seems able to comfort himself by wailing, though he will pause briefly for food – but only briefly.

The cat needs her nails done but won’t sit still for it, and if she’s not hanging off the seat of my pants by her claws she’s attempting to bury her wet food under the mat in the hall or scratch holes into the garbage bag that’s waiting to go out to the bin. When I finally got the baby down for a nap I came out to find the cat licking my sandwich.

“You’re all a bunch of jerks!” I yelled at no one in particular, and foraged a lunch of stale Bugles and a glass of white wine that may have been sitting out on the coffee table since last night. I glared at the cat but she has made it clear that apologizing to me is beneath her.

Six weeks ago I joined the Learn to Run clinic at the local Running Room, partly to get back into shape. It was not a great idea because I don’t enjoy running – what’s the point unless you’re being chased? It means rushing out of the house on Monday evenings after Nick gets home from work, and we end up eating dinner late while having to juggle laundry and any mess left over from the weekend. I usually dread it but tonight I couldn’t wait to go. These past few days I have come to understand why someone might go out for a pack of cigarettes and just not come back.

So, you know. There are highs and lows. And sometimes there is enough time in the day to linger over the stove, and some days dinner comes together in a few hasty minutes after the kid goes down for the night. Tonight was one of those hasty nights, and I’m calling the result a ragù even though it contains no meat and did not simmer for very long at all – I loaded it up with the kind of things that make it feel like it simmered long (oaky wine, soy sauce, mushrooms, Parmesan cheese), but it was only 15 minutes, while the pasta cooked. I don’t think anyone’s going to argue with me today.

If you can’t find canned butter beans, use one cup fresh or frozen lima beans or any other canned white bean. 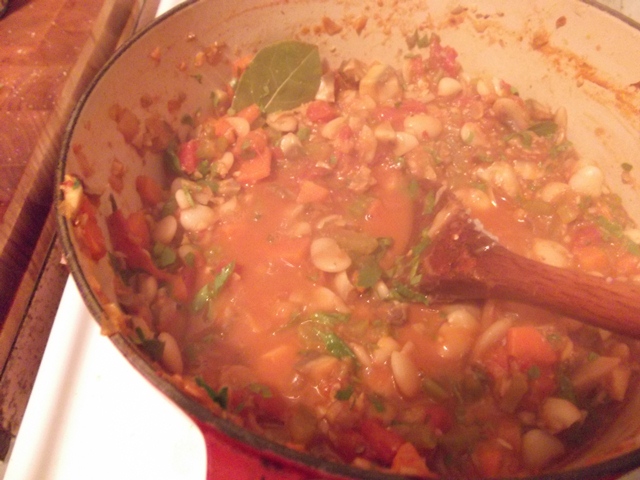 In a large, heavy-bottomed pan, sauté shallot, carrot, celery, and garlic in olive oil over medium-high heat until vegetables have begun to sweat. Add rosemary, red pepper flakes, smoked paprika, black pepper, and mushrooms, and cook until mushrooms have released their moisture, about two minutes.

Add wine and bay leaf, scraping the bottom of the pot to ensure no bits have stuck to the bottom. Reduce heat to medium, and simmer until liquid has reduced by half, one to two minutes.

Meanwhile, bring a pot of salted water to a boil. Add fettucine, and cook according to package directions – five to seven minutes – until al denté (or cooked to taste).

Add butter beans to the ragù, and continue to simmer until fetuccine is cooked. Drain pasta, and add to the ragù. Stir well. Taste, adjusting seasonings as needed. Add parsley, and serve.

One thought on “Mushroom and butter bean ragù”