I don’t really get chicken wings.

Like, I get that they are a vehicle for sauce and dip and that sauce and dip are two of humanity’s greatest triumphs, but as a vehicle they are clunky and difficult. There are too many parts of the chicken wing that are not meat, and you have to work for what you get, and you don’t get much. You have to keep eating chicken wings forever if you expect them to make a meaningful meal.

And anyway, if I am going to get my hands dirty, it’s got to be for something really worthwhile, like crab legs or brownies.

But Nick really likes them, and doesn’t even seem to care that they are messy and complicated. And since we always eat what I feel like eating sometimes it’s not a bad idea to throw him a bone. These wings are fried and then doused in sriracha and then baked, and I served them with a chilled dip of sour cream, lime juice, salt, pepper, and cilantro. For the longest time Nick ate in silence, not even pausing to swear at the Canucks or complain that he had to get his own beer. These are good wings – the first period has ended and he still hasn’t spoken a word. 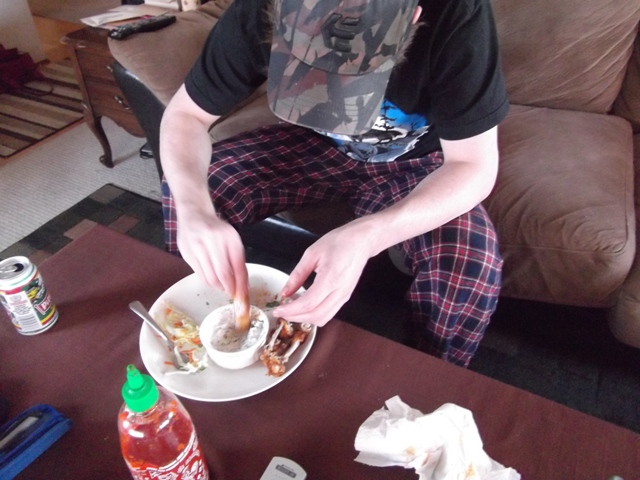 In a large pan over medium-high heat, heat oil for three minutes.

Place chicken into a plastic bag with flour, and shake until wings are covered – you may need to do this in two batches. Place half the wings gently into the pan, and cook eight to 10 minutes, until golden. Remove to a plate lined with paper towels, and repeat with the second set of wings. 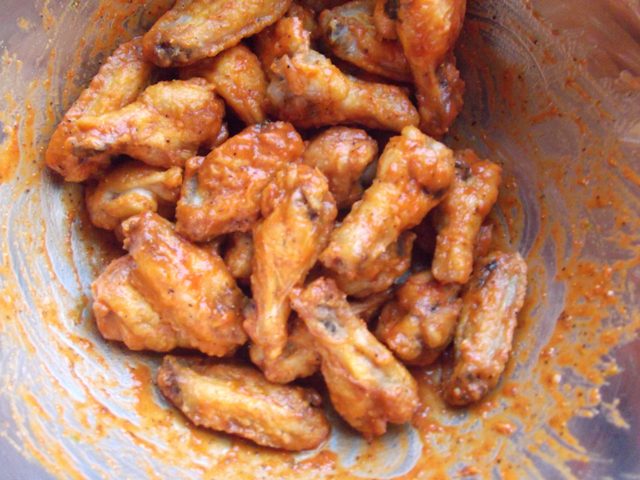 Place on a baking sheet fitted with a wire rack. Bake for 25 minutes.