I always worry that one day you’re going to realize that we drink an almost unacceptable amount of wine, more than we need to, and that your response is not going to be “I should come over!” See above for exhibit A, and the equivalent of four bottles for four people. Summer is for laughter and sharing.

To be fair, there was enough food for eight people, and once I got going on a simple meal of fried chicken and cucumber salad, the menu somehow spiralled until it included candied sweet potato and apples, whole-wheat baking powder biscuits, peas in butter with scallions, and macaroni and cheese with chipotles for Jaz, Tracy’s boyfriend, who is a vegetarian. Somehow, it all got eaten. The night ended earlier than usual because we all needed to head to our respective beds to sleep it all off. 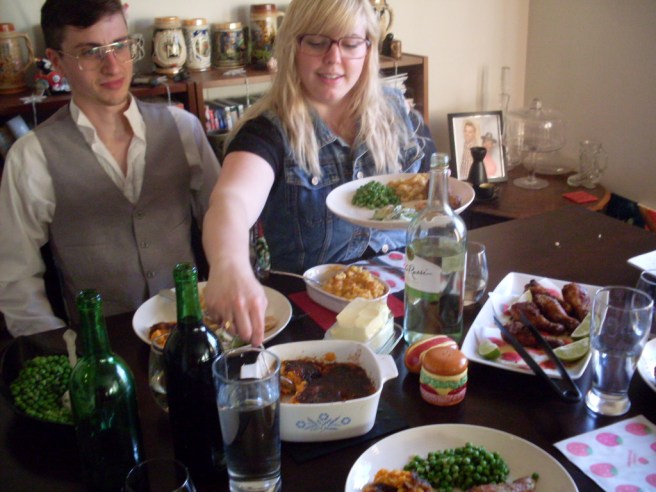 This is the point at which I want you to think you’re invited over, because you are. Anytime, so long as you’re not planning an intervention. Wear elastic-waist pants. If you think of it, try to call the night before.

We almost never issue invitations, because there are always friends passing through, either to play games or watch games on TV, or to share wine and gossip, or to catch up because somehow we all got very busy and the constant togetherness sort of died off. The latter has been the case with Tracy, who runs a fantastic arts and lit magazine and works four-thousand jobs and still finds time to win awards and go to Toronto and get into grad school to study publishing, and I have got to stop whining about being tired from my one job and my no other things. Tracy has been away and returned, and the night before she came over, she sent me a message to indicate that it’s been too long/forever, and let’s eat.

And I didn’t realize it, but I make a lot of cucumber salad come summer. It goes with everything – fried chicken and biscuits, with spicy Indian food, with delicate pieces of fish or with big hunks of grilled meat. It’s the easiest thing in the world, and I have been eating it at summer meals since I was approximately an infant. Here’s my spin on it, which you can easily adapt to your own summer table.

Place cucumber and onion slices in a large bowl, and sprinkle with salt. Toss to coat. Cover, and place in the refrigerator for two hours.

Drain liquid from veggies, and toss with yogurt, lime juice and zest, and pepper.

Serve immediately, garnished with more chopped herbs. I also like a sprinkle of paprika, sometimes, or a little bit of ground coriander.

See? So easy. So cooling, and so practical. So totally enough for way more than four people.

We’ll be back to much smaller dinners tomorrow, and a weeknight’s ration of wine. Both dinner and wine will be more than enough for more of us if you think you’ll feel like stopping by.

No-waste apple bread pudding set to a soundtrack of small boys yelling into headsets about Fortnite. Yeet yeet yeet, bro.
It’s been a long week so I bought myself some joy. @seafoodcity_granville_island clams in a @parallel49beer/garlic/sambal broth, and @cobs.bread.main baguette. Trying to support my favourite locals via delivery and also TREAT MYSELF. I’m wearing pants I’m not convinced aren’t maternity pants.
Is it Friday? Does it matter? #boterkoek for breakfast, because it is a sturdy cake you can hold in your hand while you stare blankly out the window for as long as you need. #DutchFeast #koffeetijd
20 minutes + cupboard stuff = dinner. #pastaececi
Vegetables and a lecture on Minecraft that no one can escape from.
Sorry, I just can’t get video calling to work, not sure why.