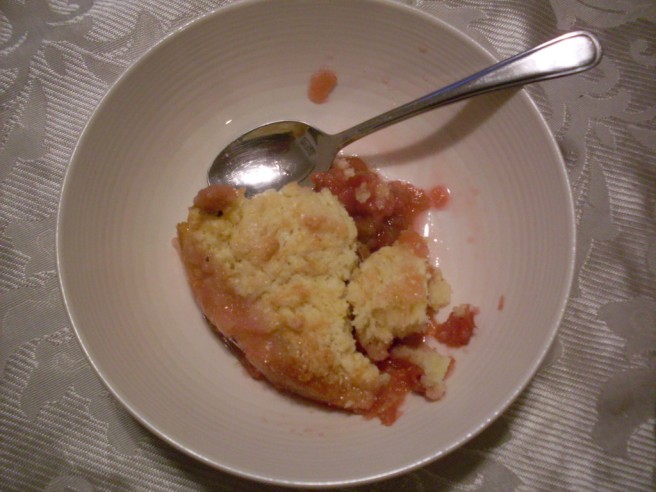 My long-lost friend Vanessa came over the other night, long-lost because she has just re-emerged from a self-imposed thesis-writing hermitage, and we had dinner and rhubarb cobbler and talked about books and our mutual love for Lady Gaga. I have been missing women lately, because the ones I know are absurd and hilarious and we’ve all reached that boring age at which “work” and “Costco” all too often rank higher on our lists of priorities than does “witty banter” and “drinking too much on a Monday.” Well, that’s not true. Work and Costco are rarely priorities of mine, but I have so many bills and we always seem to be low on toilet paper. But you know. You know?

It’s hard to justify complaining, though, and there are far worse things happening in the world than my bad mood. And while I am crabby this week, I did find that baking and witty female company made things a little better. Here’s a recipe that you can use if you need to feel better, or to serve the smart, funny someone you’ve been missing, or to the one that’s still around because she has the good sense to not to leave you alone too long. It’s a plain old cobbler recipe made spiffy with a few unexpected flavours – rhubarb and rosemary and lemon zest. All good things, and don’t forget the ice cream.

Grease a 1 1/2-quart casserole dish with butter, and into it toss rhubarb, sugar, lemon juice, rosemary, and salt. Stir to coat rhubarb.

Using a spoon or your fingers, pluck golf-ball-size rounds from the bowl and place on top of rhubarb, one ball at a time, until there is no dough left in the bowl and the rhubarb is mostly covered. You can smooth it down if you want, but I never bother. “Rustic” means that it looks homey and didn’t require fussing.

Bake for about 30 minutes, or until the top is golden and the rhubarb mixture bubbles around the sides. Let cool 10 minutes, then serve warm, with ice cream. I forgot the ice cream, and really noticed the lack of it.

The rosemary in this is what makes the whole thing magic. It might seem bizarre, but it totally works – I learned about it from Grace, and it rates as highly on the list of things I learned as the time I figured out how to multiply nines. Please do try it – there’s still rhubarb growing, as the season got off to a rocky start and it’s just beginning to really thrive. And be sure to demand company – you can ask her to pick up ice cream on the way. French vanilla is preferable.

One thought on “Rhubarb cobbler.”