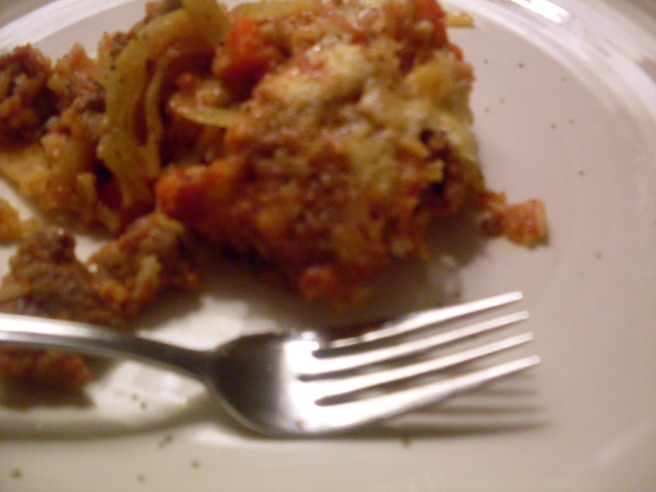 I had all these big plans this week, but I got lazy. Already. My biggest big plan was to make cabbage rolls because they are so super awesome and they make lunches and leftovers all week long and no one ever went wrong with a big dish of meat. But then, I failed. I didn’t feel like it.

Then I remembered this handy tip I got awhile back from a reader named Jenn, a very funny high-school teacher from Saskatchewan, who suggested lazy cabbage rolls, and also this lazy pierogie thing I’m going to try another lazy time. I liked her idea, but I had all the stuff for non-lazy cabbage rolls, so I adapted. This is what happened. We are going to have leftovers forever. 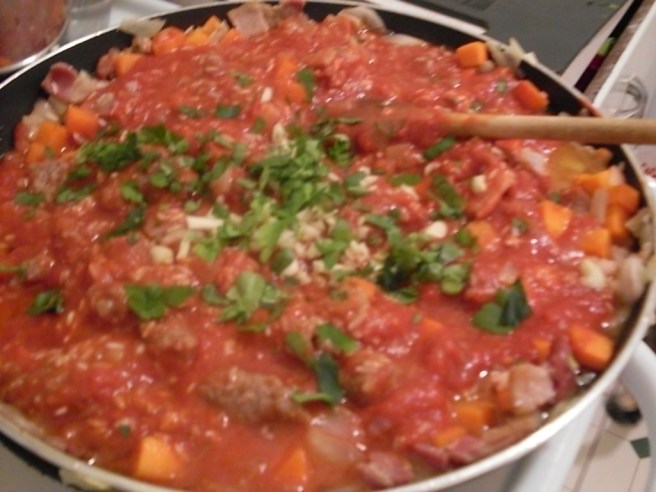 Oh, one more thing. I used bratwurst here because I always seem to have it in my freezer, and because it’s flavourful and the point here is laziness. If you don’t have bratwurst, or if it isn’t dirt cheap at your local Polish deli, then you can use ground pork, or beef, or whatever you like, but you may want to add additional seasonings.

In a large pan over medium-high heat, fry bacon until brown and crisp. Add onions and crumble bratwurst into the pan, stirring until meat has browned. Add garlic, carrots, and rice, and then add stock to deglaze, scraping the bottom of the pan to ensure all those delicious meaty bits make their way into the sauce. Season with pepper and marjoram, then pour in the crushed tomatoes. Remove from heat and stir in parsley. Taste, and salt as desired.

Layer half of the cabbage along the bottom of the pan. Pour half of meat mixture over top, then add another layer of cabbage. Press down lightly to pack. Add the remaining meat mixture, then sprinkle with breadcrumbs and cheese.

Bake covered for 80 minutes, then remove the cover and cook for an additional 10 to 15 minutes, until top is browned and bubbly. I’ll admit, the cooking time is a little longer than I like on a weeknight, so this might be something best served on Sunday night, so you can pack the leftovers for lunches.

Eat while wearing pajama pants. Know that this is going to make your entire office smell like eastern Europe tomorrow. And be okay with that. Believe me, there are worse things you could do.

One thought on “The word of the day is “lazy.””