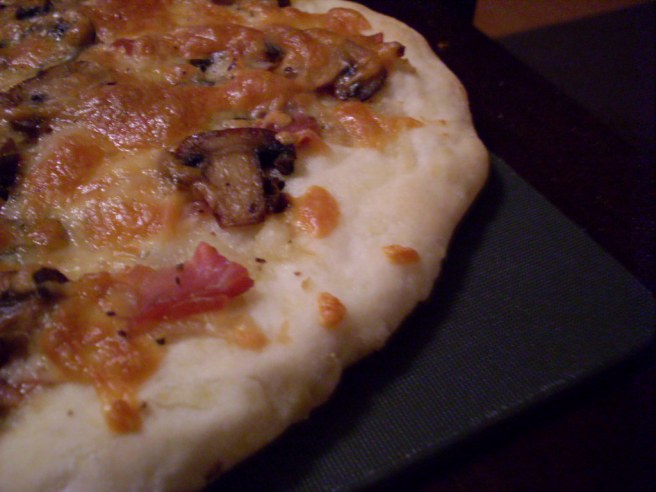 So … burdock will have to wait until tomorrow. When you see prosciutto on special, you jump on it, and then you maximize its salty porkiness by cutting it into strips and baking it onto a pizza.

I make this foccacia bread that contains potato, and it’s quite delicious and always very moist. Sometimes I stretch the dough out and turn it into pizza, but it’s not a thing to make on weeknights, when I need to eat now-if-not-sooner the moment I get home. I thought tonight I’d try shredding potato into pizza dough and baking it that way, because it’s quicker than foccacia, and I might be onto something. Something awesome.

I topped the pizza with a sauce of a crushed bulb of roasted garlic and olive oil and some basil, strips of prosciutto, and a half-pound of mushrooms cooked in olive oil and garlic. And cheese, but not that much, actually, because even though it seems counter-intuitive not to load the thing up with an excess of cheese, on a pizza like this it’s better to use only what you need. 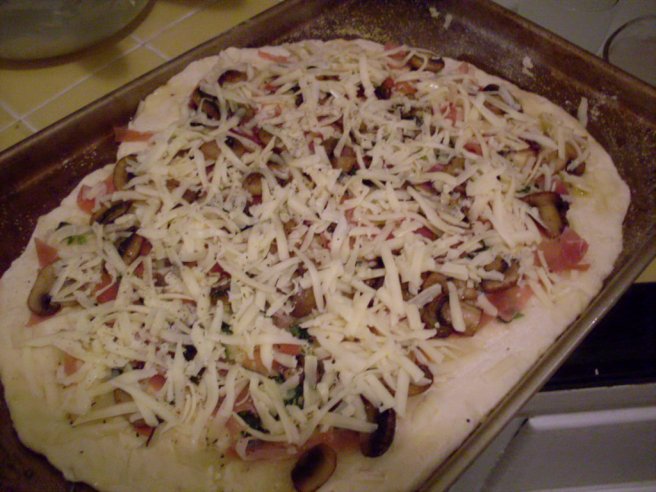 I’m only going to give you the recipe for the crust, because you can top it with whatever you want. But if you top it with roasted garlic and basil and prosciutto and mushrooms, I promise, you’ll be ecstatic upon eating it.

In a large bowl, combine yeast, sugar, and water. Let stand about five minutes, until yeast is fluffy.

Add two cups of flour, salt, and oil, and mix until a slightly sticky dough has formed. If your potato is bigger and causes an excessively moist dough, add a bit more flour. Turn out onto a floured surface, and knead in the additional quarter cup of flour.

Preheat your oven to 400°F. Cover dough and let stand for 20 minutes, as close to the oven as you can. Let it feel the warmth and grow just a bit.

Roll dough out into a relatively round sheet, a bit less than a half-inch thick, and lay onto a baking sheet sprinkled with the teaspoon of cornmeal. Top with whatever you like, and bake for about 25 minutes.

This is a bit unusual, and probably not what you want if you’re a die-hard thin-crust fan. It’s fluffy, because the potatoes get steamy as they cook, foofing up the flour and making this perfectly moist.

The other thing about it is that it’s filling, which is perfect for weeknight dinner, but it’s unexpected, and so you’re surprised around slice number three that you don’t even want dessert anymore, and you’re tempted to change into pajama pants if you haven’t already. Which I guess is good? Well, maybe the n0-dessert thing. Nick keeps mentioning my pajama pants, and how other wives wear skirts or sexy yoga pants, and he can shut right up because I feed him better than the other wives feed their Nicks, and they’re less fun and can’t hold their liquor. My pajamas are a point of contention around here.

Anyway, make this. It’s delicious. And soon, I promise, something about burdock root, which is not actually a very good hook if I’m hoping to get you to come back. 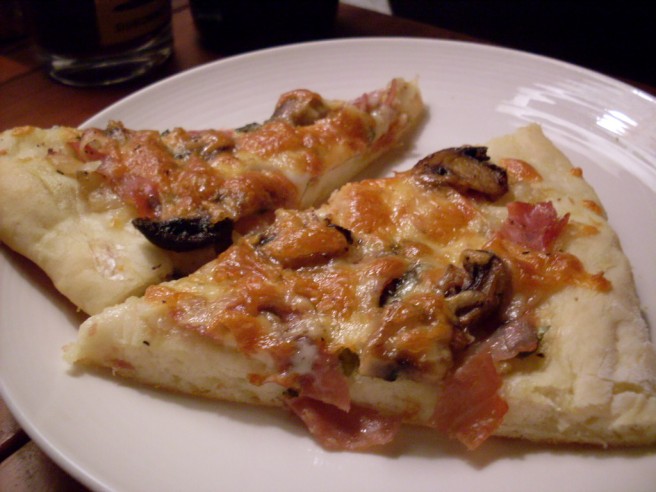 2 thoughts on “Another easy pizza crust, perfect for something unpleasant like Wednesday.”