I think I mentioned awhile back that we have to move, which makes me a sad panda because I really like it here. Well, I did, at least, until the hallway light died and proved irreplaceable (for the lazy) and the faucet stopped stopping water from dripping all day and night. But it’s nice and cozy and we have a patio that looks out at trees and I liked that. So we picked a place, and it was on the high side of barely-within-budget and had a dishwasher and in-suite laundry and a pool but they wanted us to pay the rent on the 30th of each month and I haven’t had that kind of money on the day before payday in a very long time. In fact, I haven’t had money the day before payday in a very long time.

And there were other hidden surprises, and we could have taken it and made it work but we didn’t. Why do I feel so much better all of a sudden? Sigh. Of. Relief. So, big girl making big choices that I am, I felt like I earned a baked good. Also, there were leftover yams.

This recipe is for Nick’s favourite baked good. I think I invented it, but who knows. I don’t Google stuff anymore because I feel entirely unoriginal and it always proves I’m not as smart as I think I am and there are enough opportunities for that in real life without having to search for it. It’s called “Yam Bread” because Nick named it. He’s a writer. Can you tell?

Preheat your oven to 350°F. Thoroughly grease a loaf pan. Note, if your loaf pans are smaller, just use two.

Combine your dry ingredients in a bowl. Mix thoroughly. 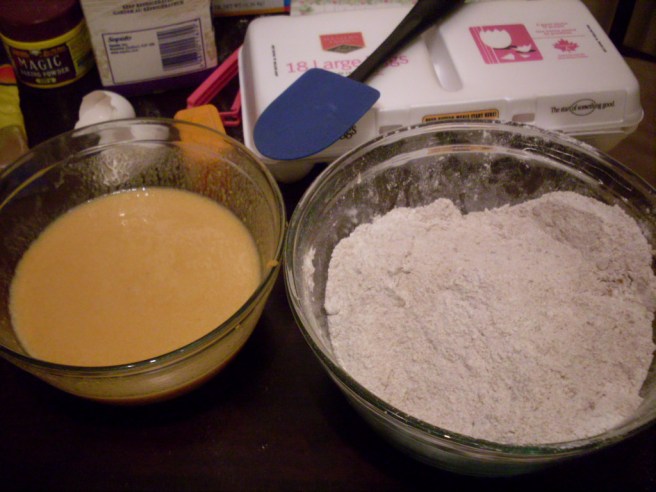 Whisk together your yams, eggs, milk, butter, and vanilla, and then pour over the flour mixture, stirring to combine. This mixture is going to be dense, and it may seem unyielding. Don’t give up. You may want to take the electronic route and throw this all into a stand mixer – that’s okay too. I was just lazy and didn’t want to set mine up. 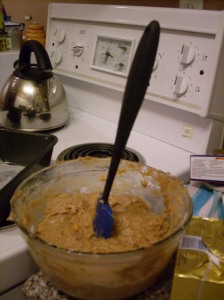 Scrape the almost dough-like batter into your prepared pan, and bake for one hour, or until a toothpick inserted into the centre comes out clean.

As this bakes, it will smell exactly like pumpkin pie. The best part? When you eat it, it will TASTE exactly like pumpkin pie, only a million times better because there’s no soggy crust and you can put butter on it. Let cool on a wire rack once it comes out of the oven. It will be crisp and crunchy on the outside, and fluffy and pie-tasting in the middle.

And so, baking comes to the rescue again. And the blogosphere, actually, although I hate calling it that because it sounds scientific and science is not fun. I call it Blogdom, because it’s like there’s a kingdom and everything’s magical because you type your problems into it and people respond to you in ways you didn’t expect them to and then you don’t feel like the only one trudging bleakly into whatever sort of despair, and there are unicorns. So, thank you, bloggy friends. You guys are cool.

9 thoughts on “I think a responsible choice deserves a baked good. And I had to clean out the fridge anyway.”