I’ve been very alone this weekend, which is never a bad thing, as Nick has been out of town and it’s been just me during the days. I almost always manage to find someone to entertain me in the evenings, but tonight, with Nick away and a busy weekend behind me, and an even busier work-week ahead, I thought that this would be a good evening to do nothing. Which always involves wine and eating.

Today I found mushrooms at the market and fell instantly in love, as one does. Fat white mushrooms, earthy-looking criminis, a meaty, sturdy shitake, and a few wispy yellow chantrelles. The thing about fancy mushrooms is that you don’t need very many – I spent exactly two dollars and eight cents on all of my mushrooms, more than enough for dinner for one. Actually, two even, because this made more than I thought it would. Most of them were the cheaper white ones – those were the base.

I decided it was a good night for a hearty, comforting meal of mushrooms on toast, which doesn’t sound like much. Indeed, it isn’t, and that’s the beauty of it. It’s simple and filling, garlicky, buttery, and autumnal, a thing you might imagine eating after a fox hunt or something similarly British. Top with a couple of soft-poached eggs and serve with a heady, oaky white wine. It’s exactly what you should eat on a foggy, misty night when it’s cool out. Or, better yet, when there’s a Julia Child retrospective airing on PBS.

I’m going to tell you how to make enough to top four slices of French bread, but you can adapt this as you like, to suit more or less, or to make it an appetizer or a side dish. Multiply, divide – math it up. It’s an easy one, and not fussy.

Since you’ve opened the wine, pour yourself a glass.

Set the oven to broil.

Melt the butter in a pan on the stove, and toss in your bacon. Let cook until the bacon is browned and crisp, two to three minutes. Add the garlic, mushrooms, thyme, nutmeg, and pepper, and fry until mushrooms have softened, another three minutes. 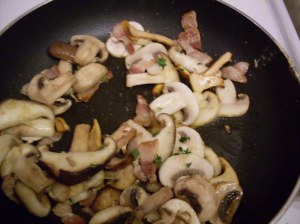 Pour in the wine, coating the bottom of the pan, and scrape up any browned bits. Stir in the creme fraiche or sour cream. Pour over toasted bread, and grate your cheese over top.

Broil for three or four minutes, until the cheese is bubbly and the edges of the bread are golden brown. If you love eggs like I love eggs, feel free to top the thing with soft, runny-y0lk eggs. But you don’t have to. This is lovely, LOVELY, all on its own.

Here it is without the eggs:

Here it is with the eggs:

And now, I am a happy little badger, and very full. And Julia has just come on, so I have to go. Back soon, and I’m looking forward to waxing poetic about peanut butter, maybe tomorrow.

9 thoughts on “Earthy toasty mushroomy deliciousness, a thing you should eat with wine while wearing pajamas.”