Rose gave me a bag of zucchini this week, and a five-pound bag of beets. And that’s quite a lot of produce, especially around here, where there’s just the two of us, and two very small apartment-kitchen counters, and all our dishes were dirty. So I didn’t cook it all right away, and by Saturday it was time to deal with it all, lest it perish and disintegrate in the crisper. And I really like beets and pickles. And relish.

So I’m giving you two recipes today, because it’s been a busy food week. Yesterday there was pattypan squash and soufflé and we picked blackberries, and today I made jam. Tomorrow, tomato sauce and something to do with strawberries. Here are Saturday’s recipes.

Boil whole beets, unpeeled, with tops and roots still attached, for 20 to 25 minutes. They should be just soft enough for the first millimetres of the prongs of a fork to just pierce the skin. Drain the beets, and dump them immediately into a sink full of ice water.

I want to say “shuck the beets.” Because shuck seems like the right word, though I don’t think it really is. You are going to peel the beets using your hands to strip the peels. Cut the tops and roots off, then strip the peel from each beet, pushing with your thumbs to rub the peel away from the flesh, then running a knife over any spots where the peel won’t tear away. I learned this week that I can record video using my camera, so I’ve taped a demo so you can see what I mean. I thought it was silent, so I didn’t bother talking.

Prepare your jars, using the Procedure for Shorter Time Processing.

Once the beets are peeled, cut them into slices, no thinner than 1/2 an inch thick. Set aside. 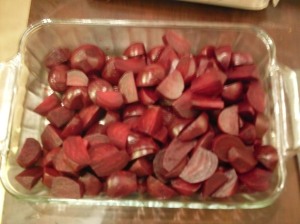 In a large stainless steel or otherwise non-reactive pot, combine your vinegar, water, sugar, spices, and salt. Bring to a boil, then add your beets. You’ll want to boil your beets for four to five minutes, just as your jars are about ready to come out of their boiling water and be filled.

Spoon beets into jars, and fill with liquid. Don’t worry about filtering out your spices. Add them to the jars too.

Once you seal the jars, process them as per the instructions linked above. Label them with the date you pickled, and be sure not to open them for six to eight weeks. They will need to soak up all that spicy pickle juice. And then they will be marvelous.

Since the pot was boiling jars anyway, I also made five little jars of zucchini relish. Each jar held 250mL/2 cups. Easy, and very fresh-tasting, not too vinegary, and gently spiced.

This recipe comes from Epicurious, because I’d never made relish before and thought it’d be a good place to start. The Epicurious recipe makes ten jars; I halved the recipe because I only had half the zucchini. I didn’t peel it or seed it, because my zucchini were very small, with thin skins and soft seeds. Here’s my adaptation:

In a large bowl, combine your zucchini, onion, and bell pepper. Salt, and refrigerate at least four hours. Drain well, and rinse.

Once drained, put your vegetables into a large stainless steel or nonreactive pot. 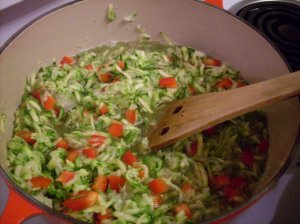 Add your vinegar, water, sugar, celery seeds, nutmeg, and white pepper, and bring to a boil. Boil for ten minutes, and then place into prepared jars. Process as usual. 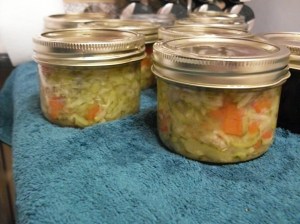 Give this a couple of weeks to sit in a cool, dark place, stewing in its juices. It will be very nice with burgers at the end of the summer, and meats and cheeses into the fall. And perhaps even the winter, if you don’t gobble it all up by then.

4 thoughts on “Beet pickles, zucchini relish, and my fingernails are still stained purple.”

This @seriouseats @shospaeth Miso Tori Paitan Ramen took a full day’s effort and at one point I blended a whole chicken and it was worth it, and if the start of the week is Sunday I’ve peaked already so there’s no sense heading into the office tomorrow to put in less than perfect work.
He’s doing acting!
Today’s mood is homemade Egg McMuffins and the most coffee. I will refill this mug up to three times.
Babies.
Here I am carb-loading with yesterday’s cornbread as if driving a kid to ten thousand activities today counts as cardio. The syrup is for energy. I am not interested in facts.
I MADE SOME GOOD STUFF.