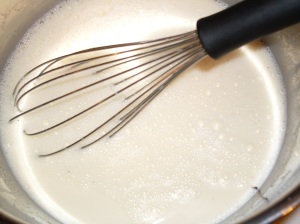 As it turns out, I’m quite a terrible photographer. I’m pretty sure with the pink camera, all my pictures would have been number-one Annie Liebowitz-esque, but it’s probably best not to dwell on that for too long. I made a lot to eat last night, and I tried to take pictures that would show how much fun it all was to make and how sumptuous it all was to eat, but everything turned out kind of blurry and sad. Apparently I have the shaky hands. Excellent for whisking, terrible for photo snapping.

Above? That’s a pot of milk and sugar and gelatin and vanilla bean, simmering until the sugar and gelatin was melted. We had panna cotta last night, because strawberries were on special and I had to use two more vanilla beans up before they dry out, standing in their lidless container. I used one, so anticipate one more vanilla bean recipe before too long. I’m starting with dessert this time, because panna cotta is among my favourite things to eat, and because I’m sure once you try it, it’ll be one of your favourite things too.

The recipe is adapted from The Williams-Sonoma Cookbook, an invaluable resource as I’ve come to find.

Pour one third, or 1/2 cup of the milk into a small pot. Sprinkle the gelatin over top, and let sit for about three minutes. This is about where I stopped reading the recipe, and also where I began to do everything wrong … but it didn’t matter, because it turned out well anyway.

The deal is you’re supposed to add the rest of the milk and the sugar and heat it until the sugar and gelatin is dissolved, then take the pot off the stove and stir in the cream and vanilla. I added the cream as well, and the vanilla bean, which I’ve found needs a good whisking to make it less frog’s-eggs-goopy and stuck together. The recipe says that the panna cotta needs at least six hours to set, and that’s if the recipe is followed, so I got a little worried. When everything that needed to dissolve dissolved, I poured the mixture into six ramekins. I filled the baking sheet between the ramekins with ice cubes, and then added about a cup of ice-cold water, to speed up the cooling-down process. 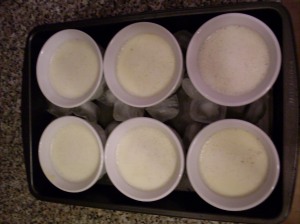 It worked, and the whole thing set in under four hours. Awesome. If I’d read through the rest of the recipe, which I usually think I’m too cool for, I would have found a very helpful hint about releasing these from their ramekins … apparently if you remove these from the fridge once set, you can place these on a towel warmed with hot water for up to two hours – this should loosen the bottoms and make them easier to get out. I didn’t have any trouble though – I ran a knife around the outsides and tipped them onto a plate. It worked just fine.

I topped these with a warm sauce of strawberries and blood orange juice, whipped cream, and sliced fresh strawberries. 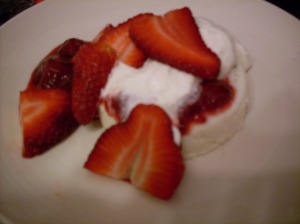 There were other things to eat last night, things like gomae, pork fried rice, firecracker shrimp tossed with avocados and cucumbers, edamame, sushi, and chicken wings marinaded in a delicious Sooin-inspired marinade. I couldn’t find a recipe that pleased me for the shrimp, so I made one up – I wrote it down as it developed.

Firecracker Shrimp with Avocado and Cucumber 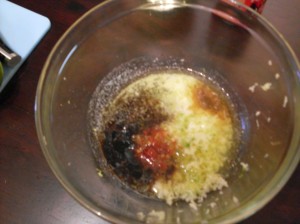 Mix butter, ginger, garlic, honey, soy sauce, sesame oil, lime zest and juice of one half of the lime, and sambal oelek (or hot sauce). Add shrimp, and skewer – we ended up needing five skewers for these. If you’re using bamboo skewers, make sure to soak them in water for an hour or so before using. 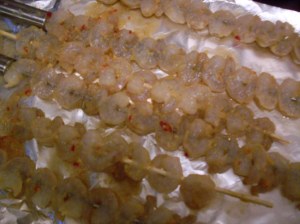 I threw these on the top rack of the barbecue on a sheet of tin foil and cooked them until they turned pink, turning them once to be sure they were cooked on both sides. It didn’t take long … eight minutes? That sounds about right.

When they come off the barbecue, toss them with the avocado and cucumber, the rest of the lime juice, and the cilantro and scallions. 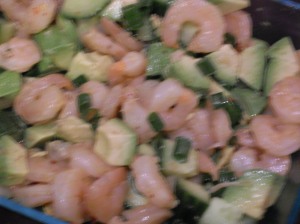 I took some fairly inadequate pictures of the rest of the feast … I’ve included them here with captions!

One thought on “Cooking without Borders”