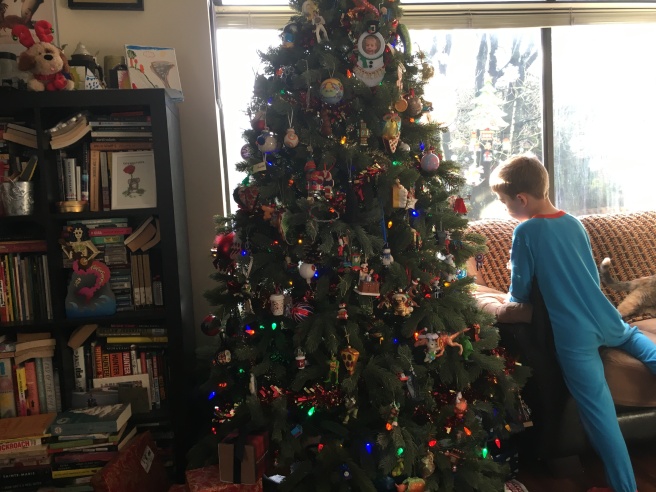 It is 6:15, and it is still dark outside, and it will be cold in our apartment for another twenty minutes, until the fireplace has warmed the living room and the heat I just turned on begins to warm the bedrooms. I am baking cookies this early in the morning for the third time this week.

It isn’t just cookies – there were the seven pounds of onions to be caramelized, with a dollop of homemade creme fraiche to be folded into them so that later the whole mess could be spread onto puff pastry for an effortless snack on Christmas day. There is salt cod to soak, sushi rice to make and fold into flaked sockeye salmon which was roasted with a glaze of ponzu and a layer of orange slices, and each fish must be rolled into its own type of croquette. There are fruits and cheeses to buy and slice and serve, there are dips and sauces to make and store for later, there are eggs to boil and peel and bread to knead and bake, there are all of the lunches and dinners we still have to eat around everything else.

Everything has to be perfect. 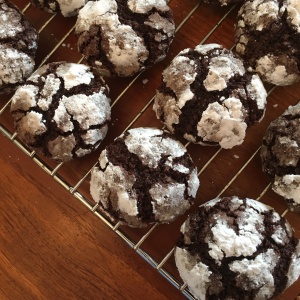 “Why are you doing this?” my friend Katherine asked over iMessage, when I complained that my feet hurt and there was still so much to do.

And the truth is, I don’t really know. I think a lot of us have felt the weight of 2018, and like maybe it’s too soon for the holidays, or we’re not quite in the mood. I think a lot of us maybe feel this way every year, at least a little bit. And I think if it was just me, I’d let myself be a little maudlin, maybe drink a few too many rum and caffeine-free Diet Cokes and let myself have popcorn for dinner and watch all the Bob’s Burgers holiday specials in one go. I would never listen to Dominick The Donkey, which some children think is the greatest holiday song in the world.

At 8:15, I will hear a child’s heavy steps in the hallway, and in the entrance to the kitchen, a rumpled boy with puffy, squinting eyes will appear. This place will smell like chocolate, vanilla, and peanut butter if he’s lucky. There will be flour on the floor and the dishwasher will be running and the lights on the Christmas tree will be on, and the living room will be warm and the cat will be there purring, waiting for him. He will eat a bowl of Cheerios and we will argue a little about screen time and he will win because the cookies have to come out of the oven.

It has to be perfect for him.

And it doesn’t, really, and I know that, because everything is new to him and whatever we say is tradition is tradition as far as he’s concerned, because this whole thing is fantastic and wonderful and every day there are treats and special outings and movies about magic and a few new presents under the tree. Even when we don’t much feel like carrying a torch, the light we hold makes the world brighter for other people.

Later, we will bake the cookies to leave for Santa and drink hot chocolate and read Christmas books and draw pictures of Santa’s bum catching fire as he falls down a chimney and watch The Muppet Christmas Carol and eat KFC for dinner because one year we learned that a bucket of chicken is a holiday tradition in Japan and there’s a KFC three blocks away so why can’t it be our tradition too?

I have to head out to the store one last time, because we’re running low on butter and the reindeer prefer different carrots than the ones we have. “Why are you doing this?” I think to myself, and then I look over at the little goon on my couch in Spider-Man pajamas and I grab my coat, tell him he doesn’t have to change into real clothes because it’s Christmas, and off we go.