A few months ago a very sweet student in one of the labs at work phoned his grandmother in Iran to get me a recipe, which he then translated from Farsi but maybe not very well. I knew he could cook, and I had wondered if he ever made mirza ghasemi, a dish of grilled eggplant and tomatoes mashed together with olive oil and spices and garlic and topped with fried egg. I had recently fallen in love with the dish at a Persian restaurant, but wasn’t sure exactly what was in it – there was no description on the restaurant menu, and sometimes Google lies. He knew it, but he didn’t make it, so he asked if I could wait a few days and then called home.

It wasn’t eggplant season then, but it is now, so I pulled his recipe out of my inbox and realized there were a few things lost (or exaggerated) in translation – the ratio of eggs to eggplants was way off. A promising neuroscience student, he was hired away to Germany in the meantime so I can’t ask him my questions; this is a loose adaptation of his grandmother’s recipe, a dish from northern Iran that transforms bitter eggplant into a smoky dip for sangak or regular old white bread (toasted to within in an inch of its life for optimal sopping). The eggs make it a meal for two, or a hearty appetizer or snack for four.

I have given directions for this dish using the oven and stove, but please note that if it is a hot day and you have a side burner on your outdoor grill, you can make this entirely outside using roughly the same instructions and it will be that much better. Serve with bread and lemon quarters 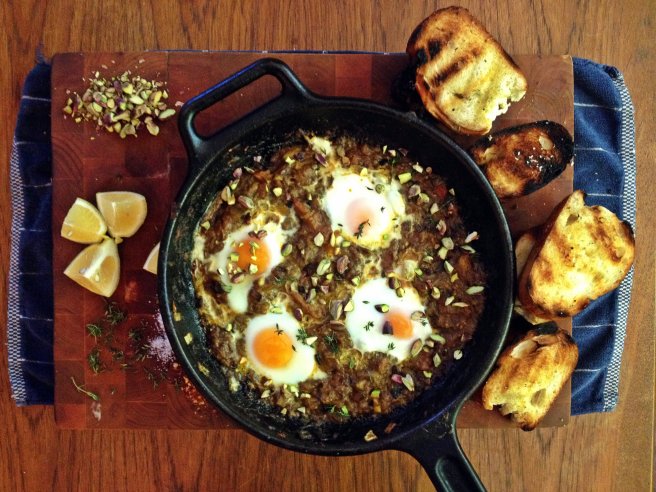 If you roast your veggies ahead of time, return your grill or oven to 400°F before proceeding.

Gently remove skins from tomatoes and eggplants. If you like a smooth puree, you can use a food mill to slough off the skins and stuff. I prefer to mash the veggies’ innards with a fork or potato masher until they form a chunky mush. Reserve any liquids that have accumulated at the bottom of the bowl you cooled your veggies in.

Heat remaining olive oil in a 12″ skillet or cast iron pan over medium-high heat until shimmering. Add onion, and cook for about three minutes, until translucent but not browned. Add garlic, cumin, salt, paprika, turmeric, pepper, and pepper flakes, and cook for another minute, until the spices are fragrant.

Add eggplant-tomato mush, and any remaining liquids, and simmer for about six minutes, until the liquid has evaporated and the mixture looks a bit dry and sticky, like it would burn to the bottom of the pan if you’d let it. Add lemon juice, stir, and taste. Adjust seasonings as needed.

Using a spoon, create four little holes in the eggplant mixture, then crack an egg into each hole. Place the pan in the oven, and bake until the eggs have set to your liking, five to 10 minutes.