I live in Vancouver, which is in Canada but not typically Canadian in many ways, the most disgraceful of which is our complete inability to function in the presence of even a tiny bit of snow. It doesn’t snow much here – some years, it doesn’t snow at all. I can’t remember my last snowy Christmas. We do not have the infrastructure to support this kind of weather, and so a couple of centimeters of snow on the streets sends us into turmoil.

It snowed today. I worked from home.

We are planning our next adventure, and we’ve booked our flights – we’ll be in the Netherlands in late January. I am working on a new book, Dutch Feast, and it will be in bookstores and online in fall 2017, and the thing about Dutch food that is so lovely is that a lot of it is sugary carbs. And so even though it’s cold outside and my toes have yet to defrost from this morning’s failed attempt at finding a bus to work, I’m eating Dutch sweets and my home smells like speculaas spices. I mean, it’s an absolute disaster because recipe testing is messy and I’m usually remiss in cleaning up, but it smells nice and if I don’t look in the kitchen this whole scene is pretty cozy. 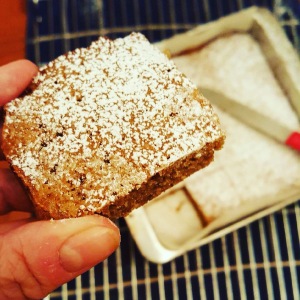 These speculaas blondies are an adaptation of a recipe in Heleen AM Halverhout’s Dutch Cooking (©1972); she suggests baking speculaas cookie dough “like brownies,” which she called speculaasjes. I like this idea quite a lot, because everyone knows brownies are better than cookies. We can debate this, but I’m not likely to entertain opposing viewpoints in this case. The nice thing about these speculaasjes is that they require no special equipment (no cutters or rolling pins required!), so if you start right now, you can have chewy, sweet speculaas blondies in time for this evening’s cup of tea.

Preheat your oven to 325°F. Grease an 8″ x 8″ square baking pan and line the bottom with parchment paper.

Cream together butter and sugar. Add the eggs, and beat until the mixture looks smooth. Add rum, cinnamon, nutmeg, ground ginger, cloves, and salt, and mix until combined.

Bake for 30 to 35 minutes, until a toothpick inserted into the centre comes out mostly clean (a few clingy crumbs = perfect). You want these just shy of totally baked, so that they are still chewy.

Cool the blondies in the pan on a wire rack for five minutes, then turn them out onto the rack to cool completely.

Serve with tea or coffee and your feet in fuzzy socks or slippers.