I’ve been busy at work, working late the first two days of the week but then showing up late this morning because Toddler was fevered and barfing. The little guy seemed like he was doing better, but that was the Tylenol talking and by the time I got home he was back to flat and sweating, watching a Thomas (the train) movie for the fifth time in a row and throwing up his warm milk. I gave him a Gravol and sang him to sleep, but he’s been stirring all evening, whimpering and breathing heavy.

I drink an drink when it’s been a long week already and after Toddler has gone to bed sick.

I’ve always been partial to writers with well-known vices. And since so many of the good ones had them, it’s easy to call a bit of cold vodka and a bit of olive brine something akin to creative juice; a drink once in a while suggests a darkness in one’s heart that makes one crave a bit of levity. Anyone who willingly suffers the creative process has at least a little darkness, and no doubt more than some will admit.

I read The Great Gatsby a million years ago in a high school English class and it bored me to death, but I read it again in a community college lit class my first year out of high school and found it suddenly very exciting. It was among my first Serious Literature, and I got it. (I wanted to be a lawyer and Irish when I was in high school and so I read every John Grisham book and every Maeve Binchy book published before 2001. I had some stories to catch up on.) 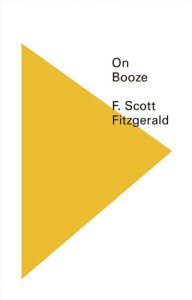 The Great Gatsby is by no means my favourite book, nor is it anywhere near my top ten, but it’s like an old friend who shows up to charm me every so often. For that reason, On Booze jumped out at me when I was wandering my local bookstore aimlessly one rainy weekend afternoon. On Booze is a collection of F. Scott Fitzgerald’s writing on the topic of booze (excerpts, letters and essays), and as it’s 86 pages it’s the kind of thing you can finish off with a few glasses of wine and some cheese on crackers some night when you don’t have anything else to do.

“Perfectly respectable girl, but only been drinking that day. No matter how long she lives she’ll always know she’s killed somebody.”

(Makes one. Perfect to conclude long work-weeks and to soothe the tired mind after dealing with a sick cat or kid. Don’t use fancy vodka – you’re just going to stank it up with the olive juice.)

Put ice, vodka, olive juice, and vermouth in a shaker, put the lid on it, shake it 23 times, then strain the mixture into a chilled glass. You can use a martini glass but those things are stupid impractical and prone to tipping; I am a classy lady who uses a tumbler because it doesn’t spill.

*You can use gin if you’re a purist, but gin and I have troubled history and are incompatible so my preference is vodka. Make the choice that best suits your needs on any given evening.

3 thoughts on “Something to Read: On Booze”