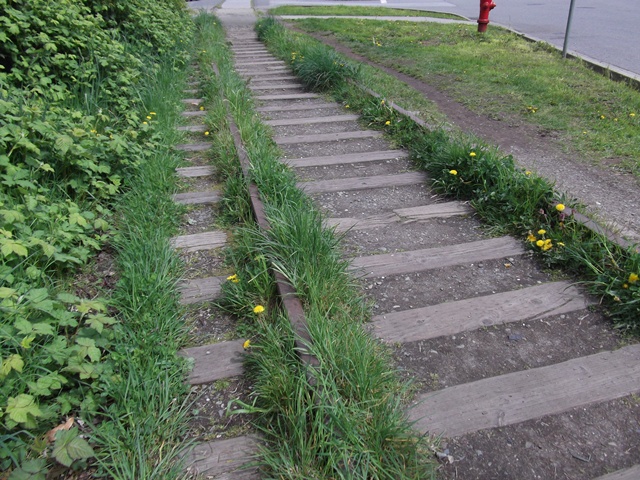 I was tossing sizzling olives, garlic, and chilies in a hot pan at the stove when the phone rang last night. Nick handed it to me, and I jabbered on for a few minutes, squealing intermittently and so excitedly that Nick and his brother-in-law, Nathan, were certain something amazing must have happened.

“Did they offer you that job?” Nathan asked, as I had an interview recently that I thought went not too badly.

“Did we get into that co-op?” Nick asked, as we were told we’d have an interview for a place in Chinatown that’d cost half what we’re currently paying for rent each month.

And I was very excited, and while they both claimed to be very happy for me, I think they underestimated how riled up I can get, especially about little things like a plot of dirt beside an abandoned train track. They ought to know by now I’d be downright screechy about the job or the co-op – the subtle difference between sound-effects is very important. 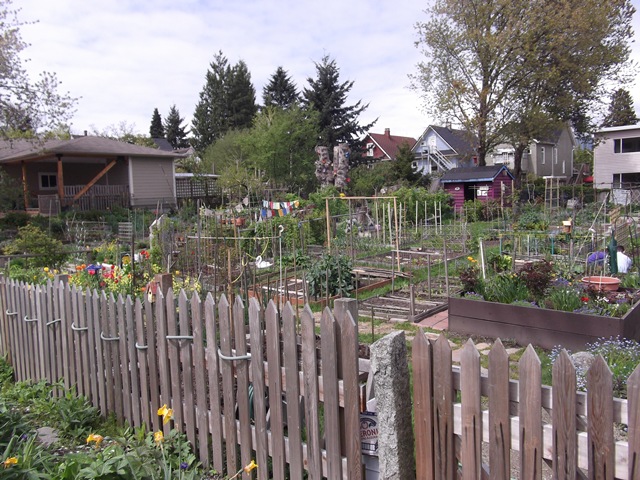 Anyway. Last summer, the lady who gave us a spot in her yard let us know she’d be moving, and so we’d be losing our plot. I never got to see my butternut squash mature, as she moved away before the last harvest of the fall. I had gotten us on a waiting list for a few community gardens, but was told there would likely be no spaces in 2012 and so had fallen into a bit of a sulk, as one does.

And then, just like that, someone gave up his space, and this morning I signed a contract and promised not to be negligent and abandon my plot to the weeds. So we have a garden – and it is beautiful in the way I imagined The Secret Garden was when I read the book as a child – and there will be picnics there. There are communal lettuces, berries, rhubarb, and flowers, and birdhouses containing chickadees and bushtits (which made me laugh through my nose because I am, like, nine). Our plot is in need of some work, but all the tools are there for us and it’s already been given its allotment of fresh compost.

Now we just have to figure out what we’ll grow. Of course we will have radishes, and as many as possible. But what else? What seeds would you suggest to a pair of would-be gardeners on the west coast who want a high probability of success and do not desire a challenge?

Silence is violence, and though the content here is fluffy food and kid stuff mostly, it feels disingenuous for me to post another meal picture and it’s an omission to not post that #blacklivesmatter. Amplify BIPOC voices, show your white kids what’s happening and continue that conversation beyond today and this week so that it sinks in, and lend your support where you can including giving money to the organizations doing the work. There’s absolutely a group in your area that needs funding. I’m shutting up and listening. Challenge and educate your friends who don’t get it, it’s time.
I don’t need meat but I would eat every crab.
My aesthetic is 1970s mom with a subscription to Good Housekeeping and a minor daytime Chardonnay habit. I made these roses out of carrots, my family should be more impressed.
I mean, why not?
If you can fry your own favourites you can fix your own mood. Marinate eight chicken thighs in yellow American mustard and salt in a freezer bag in the fridge for a few hours. 45 minutes to an hour before cooking, let the chicken rest in its bag on the counter so it comes up to room temperature. Dredge in flour seasoned with salt and pepper, shake it off, then deep fry at 375F for 12 to 15 minutes, flipping halfway, until golden and crisp and the internal temperature reads at least 165F. Let rest on a wire rack positioned over a board lined with paper towel for five minutes. Salt again in the meantime. Eat with cold fruit, wavy potato chips, and hot sauce. Do not contemplate the day’s failures. That is what Thursday is for.
@nvanderwoud cooked and then refused to participate in a fun photo shoot to show off. Praise him for his efforts so he does it again but also call him rude please.