When we found out that Nick has diabetes, we were  lucky in that we were already eating mostly pretty well, most of the time, cheese and butter and cream aside, and that we didn’t have to make significant dietary changes. I threw out one stale half-bag of poor-quality elbow macaroni that I might have bought at Walmart that dark year I was an intern and had to have three roommates in a basement suite where the front door only kind of locked and where when it rained the water ran into the suite right over the electrical panel. We weren’t going to eat it anyway.

The only thing I really miss now that Nick is restricted is having pasta as a default – not being able to serve up a big plate of refined white carbs when I don’t feel like putting in a real effort, which can happen a couple of times a week, means adapting to a new kind of laziness. And the difference between pasta and something like, say risotto or sushi, which is also white and low on the glycemic index, is that pasta tends to last a couple of meals so you get that good blood-sugar spike a couple of days in a row. Fine for me, shakes and comas for him.

He can still have a small amount of pasta, of course. What he can have is likely what would be considered a normal portion size. And when you get down to comparing labels and noting the varying levels of carbohydrates, the rice pastas and whole-wheat pastas and gluten-free pastas are all similarly bad news carbohydrate-wise; a plate of the whole-wheat stuff is going to affect Captain Diabetes the same way that a plate of the delicious semolina stuff will.

So we adapted. Instead of a big plate of pasta, we have a big plate of stuff with pasta in it if there isn’t enough time to devise a huge and clever feast, or if the idea of opening a cupboard is too daunting to even consider. Here is one of those meals. It calls for blanching, which may qualify as a step that’s too daunting, but it’s really nothing. I promise.

Rapini and sausage with white beans and orecchiette

Bring a large pot of lightly salted water to a boil. Drop chopped rapini in, and boil for two to three minutes until wilted and brightened in colour. Remove rapini from water, reserving liquid, and plunge into a large bowl of icy water. Set aside.

Return the pot to the heat and bring water back up to a boil.

Meanwhile, heat olive oil in a large pan over medium-high heat. Cook onions until translucent. Add garlic, then crumble sausage into the pan. Stir with a wooden spoon, breaking the meat up as you go. Add red pepper flakes and tomato paste and continue moving the meat around the pan.

When the water has come to a boil, add pasta and boil until al denté, about eight minutes.

Drain and then add rapini to the pan, stirring to coat in pan juices. As pasta finishes cooking, add beans and lemon zest and juice, then add pasta. Reserve some of the pasta water in case the pan becomes too dry. 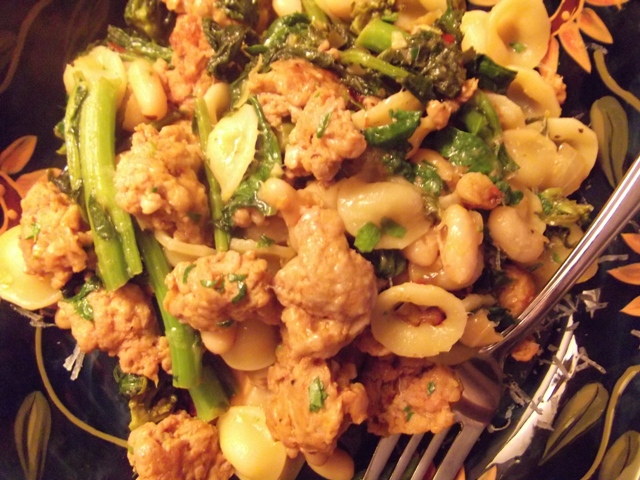