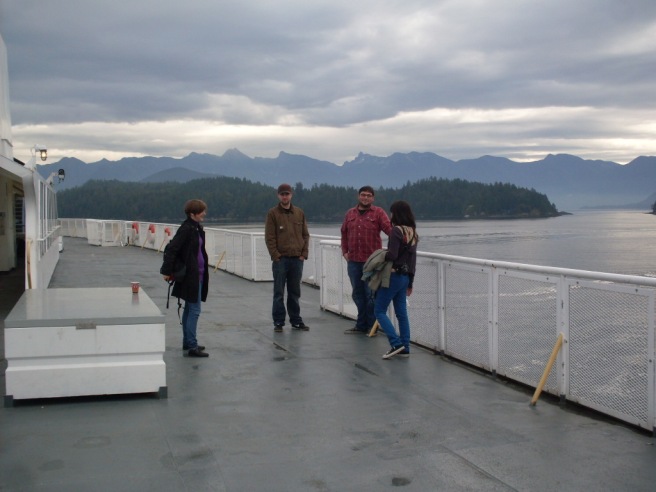 On Friday, Grace, Laraine, Paul, Nick, and I hopped a couple of ferries and headed to Powell River for what shall henceforth and forever be known as The Ultimate Seafood Feast. Grace planned the whole thing (and included handouts), and it was lovely.

We stayed about 30 minutes out of Powell River, near Desolation Sound. There was nothing desolate about it, and not a sound except for a woodpecker and a few chirpy little red squirrels in the trees. 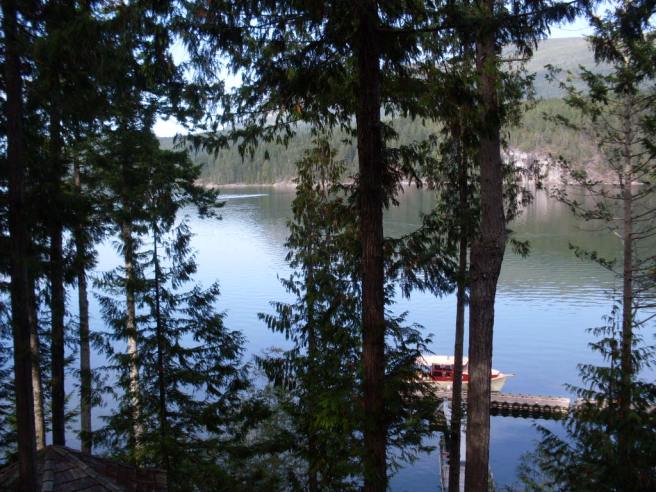 The point of the trip was clam-digging, though a secondary benefit was certainly relaxation. I read MFK Fisher’s Serve it Forth, Paul made sashimi of the sockeye he had caught the night before we left, and we played Scrabble and drank cocktails and cheap beer and were very civilized out there in our cabin in the woods. Nick had five naps. We were there two nights. 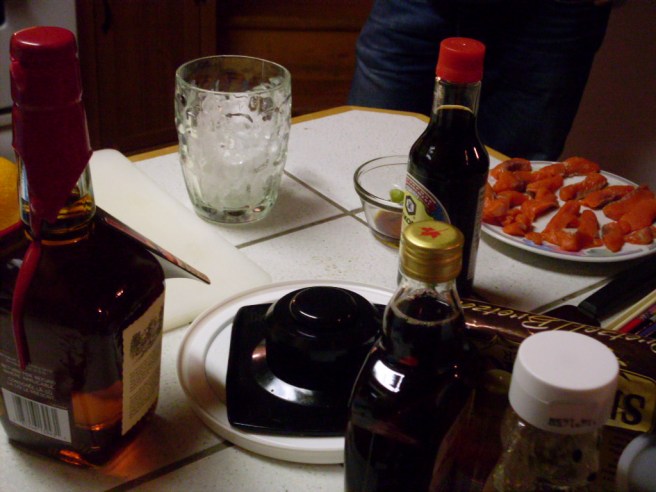 On Saturday morning, our eyes still glued mostly shut after our first feast night and its requisite debauchery, we wandered out to the shore to dig for clams at low tide. 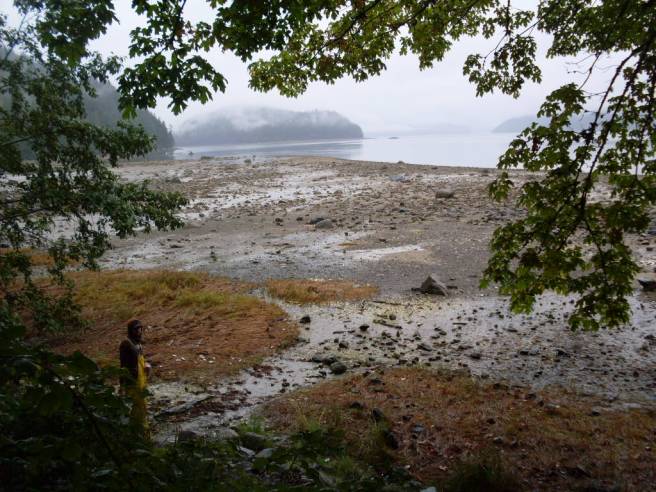 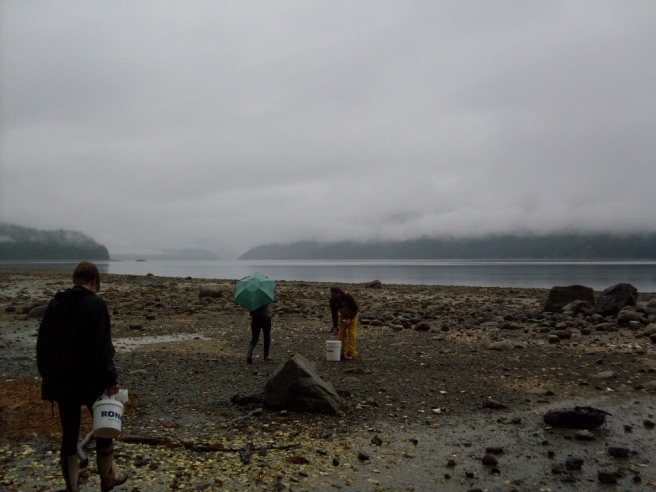 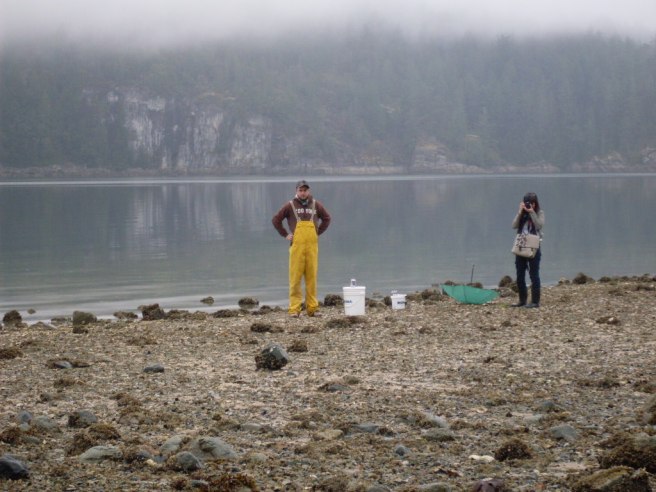 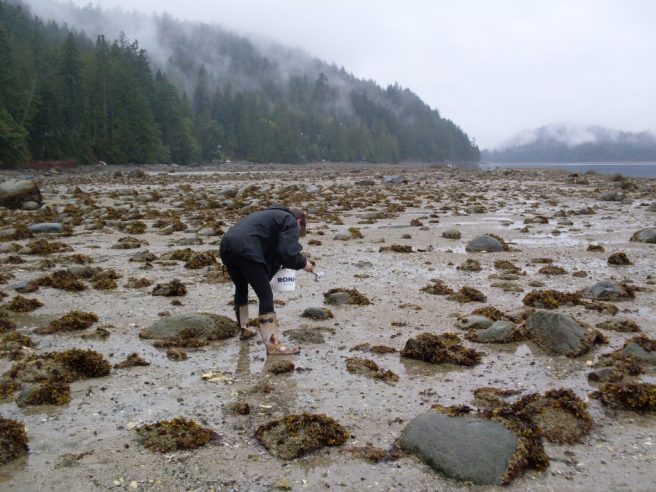 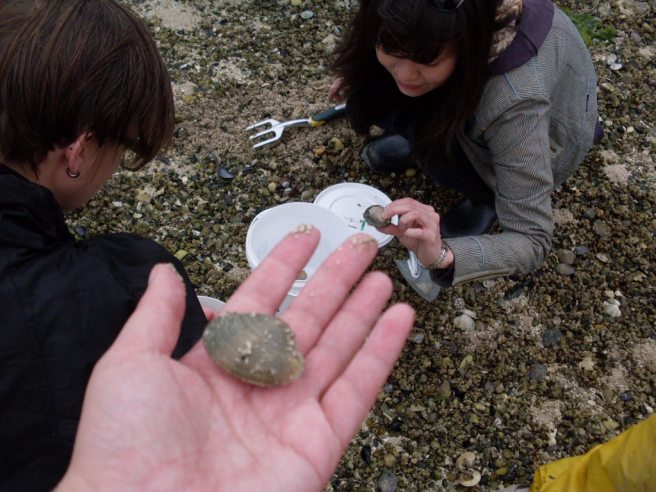 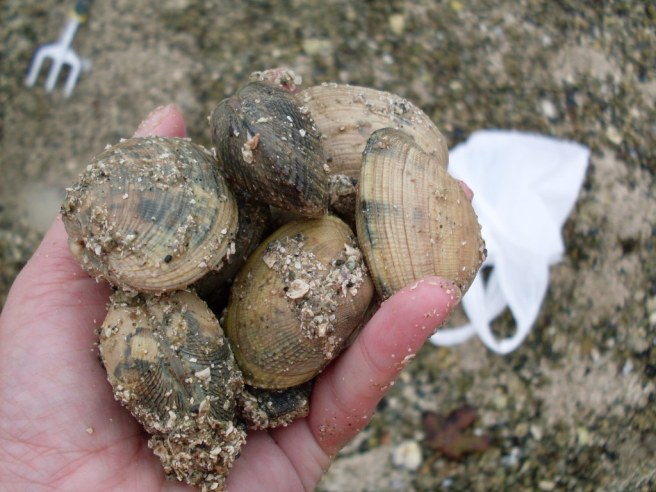 It was all very thrilling. Every so often, Grace would squeal and announce that “I found the biggest one!” or skip over with a particularly lovely clam and declare that it would become earrings, a garland, or a fridge magnet stuck with googly eyes. Paul and Nick wandered off to pick mussels and oysters, and soon we had an embarrassment of edible riches. 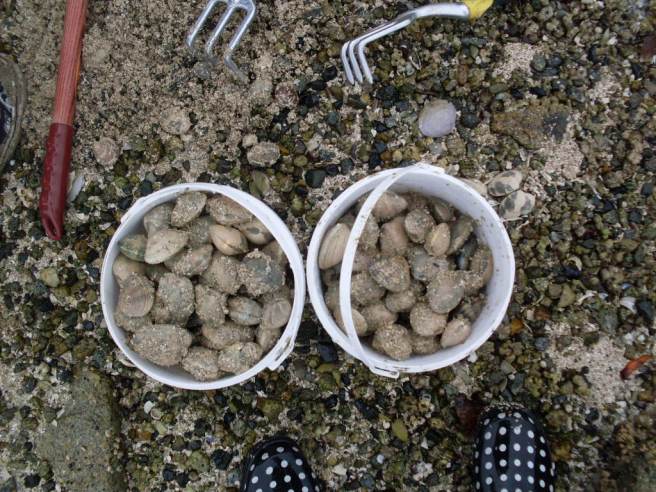 When we got home, we all took naps, and then considered the oysters. 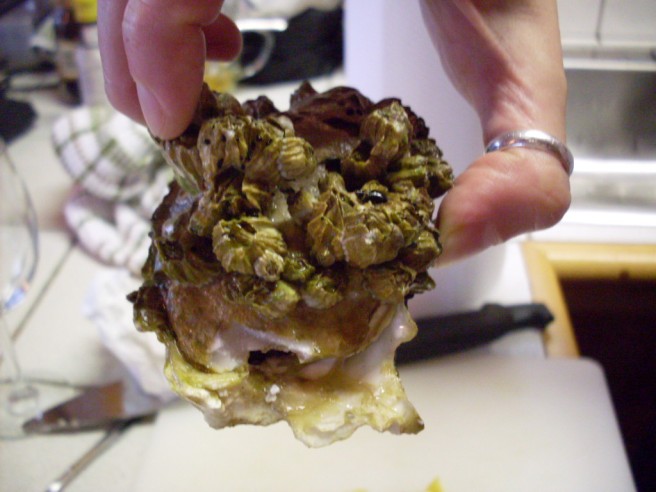 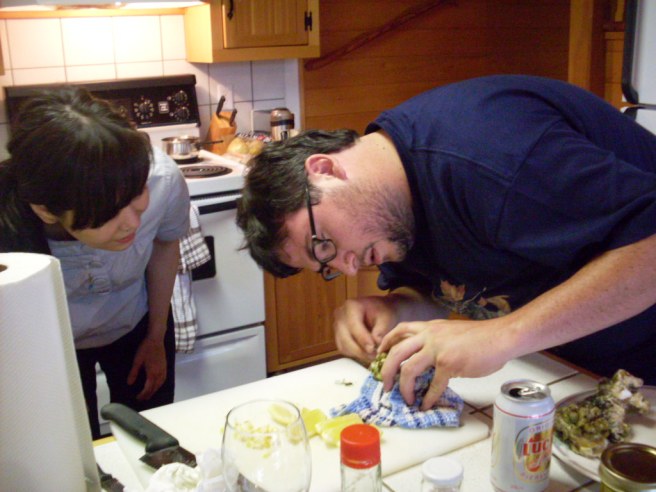 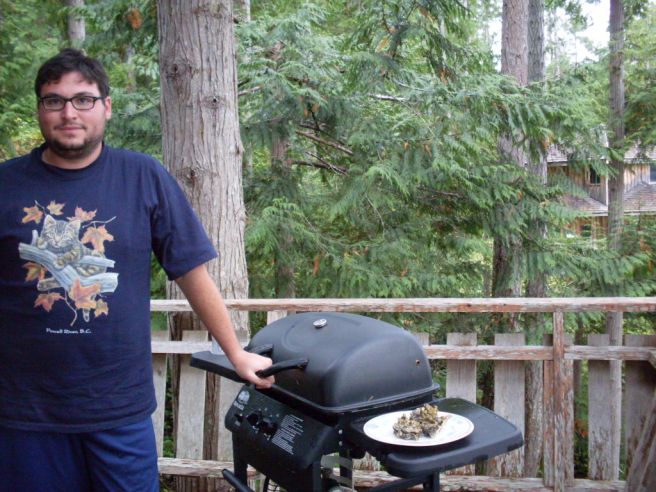 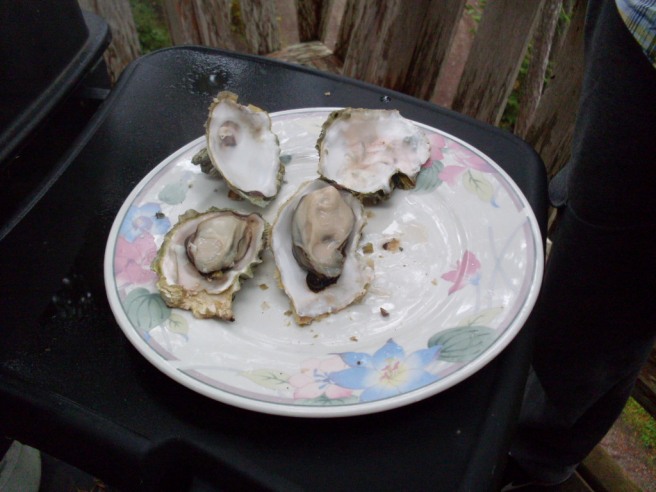 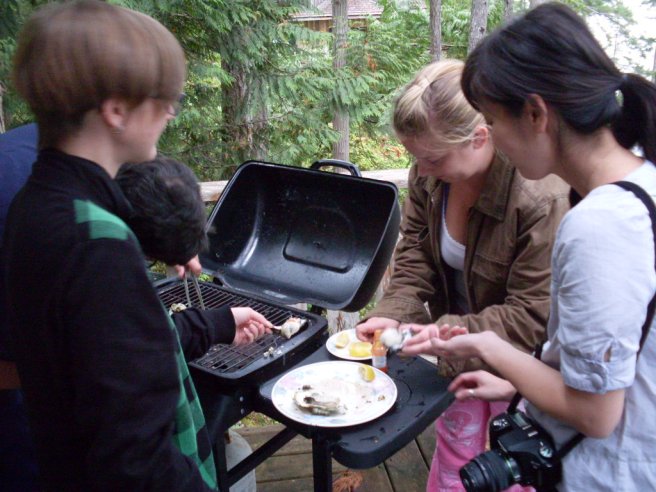 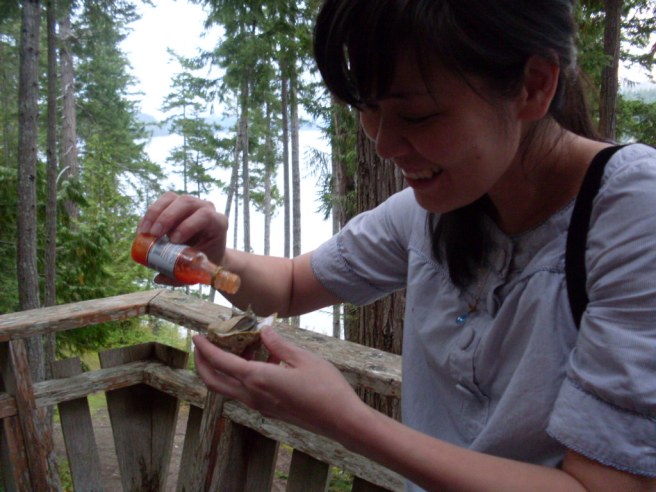 And then we had naps again.

And when we woke up, Laraine and I read in the living room while Nick and Paul played a game and Grace poured wine and did dishes and then when we told her not to she said “But I’m having fun!” so we let her have the kitchen.

We let the clams soak in salted water for a few hours so that they’d release any grit they might be holding onto, and Paul de-bearded some mussels. I don’t think I have ever had better clams than we had that evening – Grace made her Dad’s recipe. She poured a bit of sake, a few chopped scallions, and some garlic into the pan and steamed the clams until they burst open. They were perfect, and needed no salt. The mussels were steamed in beer and cream with fennel, and were also very elegant. 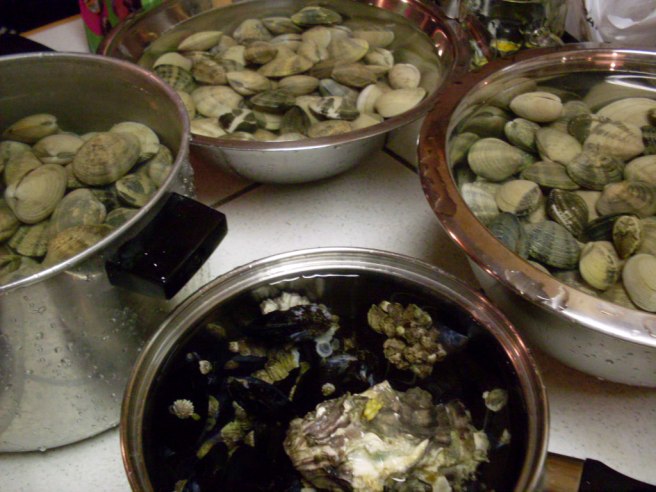 We ate dinner huddled around the stove, with Grace steaming batch after batch of clams, each of us forking bites out of the pan and dipping Laraine’s homemade sourdough into the broth. From now on, this is the only way I will serve shellfish for company. 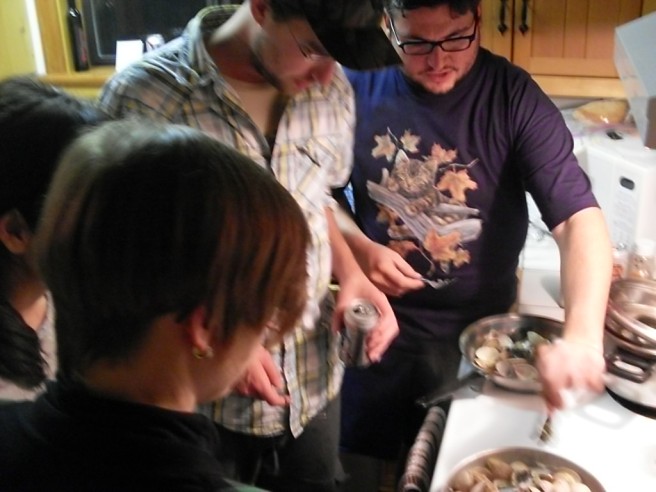 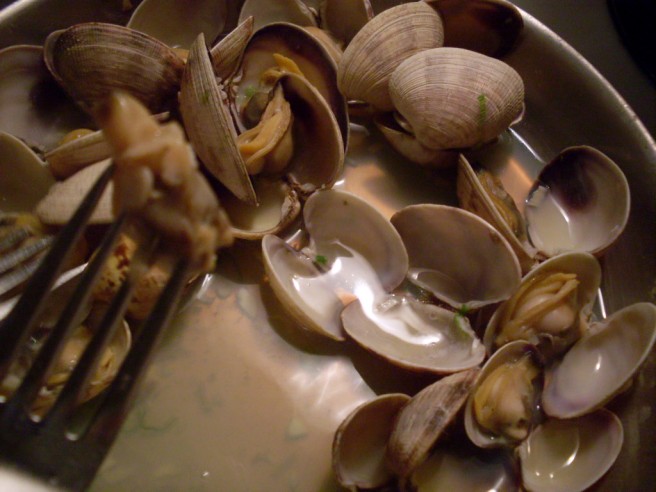 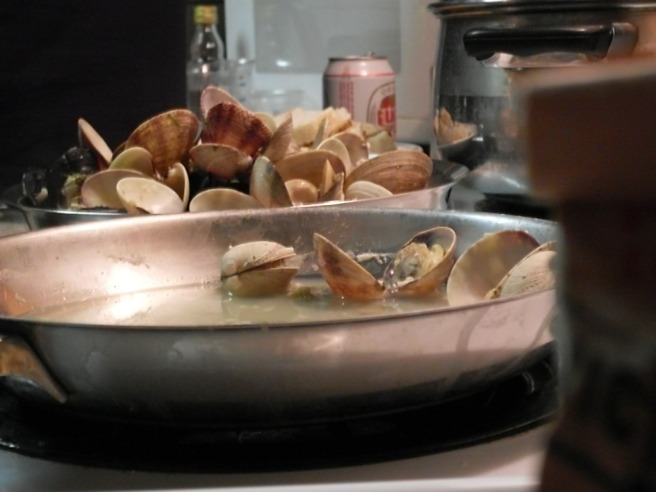 It was so delicious, and we ate throughout the evening, into the night. And at the end of it, we sipped sparkling wine and made fun of Nick and then had cheesecake and then warmed dates stuffed with Roquefort, and there has never been anything better in the whole history of the world.

It was so hard to leave! Fortunately, we were each able to bring a few cooked clams home, so we’ll be able to enjoy a feast more each. How fresh and wonderful it all was! And how impossible to forget! 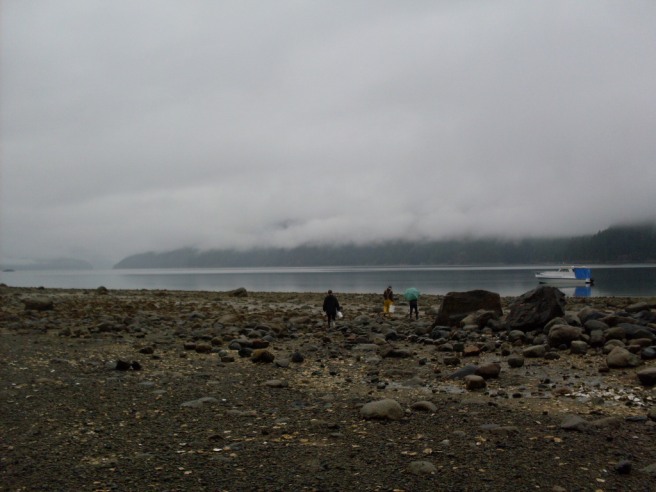 10 thoughts on “A Clambush at Desolation Sound.”