My mom keeps talking about these little bread treats called St. Lorenzo buns. Apparently they’re a buttery Mexican treat that have a glob of cheese in the centre, and they are served warm at breakfast-time at at least one resort. Unfortunately, they don’t seem to exist anywhere but that resort and/or my mom’s imagination, as a Google search turned up nothing, even when I varied the spelling. All I’ve got to go on is that they’re pretty much savoury, and that they have a soft cheese in the centre.

I emailed Alana at Eating from the Ground Up, as she’s doing some very accessible (and delicious) homemade cheeses these days, to see if she knew of a cheese similar to what Mom vaguely described. She had a few good ideas, but I wasn’t sure about the texture, and about using apple cider vinegar – aren’t apples a rare treat in Mexico? I wanted to use limes. (Even when asking for help I’m a stubborn know-it-all. The worst kind.)

If you know how the cheese in these is supposed to be, or if you know what these buns are and can help me, please let me know. I think the cheese should be something like panela, which is similar-ish to ricotta, I guess. My mom said it should be creamier, like cream cheese (or mascarpone), which you could use as well (1 tbsp. per bun). I like a challenge, but I’ve started with too few facts to produce a reliable facsimile of the buns. Unless you can determine that the following recipe is a reasonable facsimile … in that case, compliments and adoration will do.

Cheese (based on this recipe here):

The night you make the buns, set cold milk and cream in a pot over low heat. Add lime juice. Using a candy thermometer, bring milk to 180°F. Don’t rush it. This should take an hour. Once there, increase temperature to medium, and allow liquid to come to a boil, just over 200°F. The curd will begin to separate from the whey – the whole thing will resemble icebergs in a murky sea.

Remove pot from heat, and let stand 10 minutes. Drain in a colander lined with cheesecloth, 15 minutes. 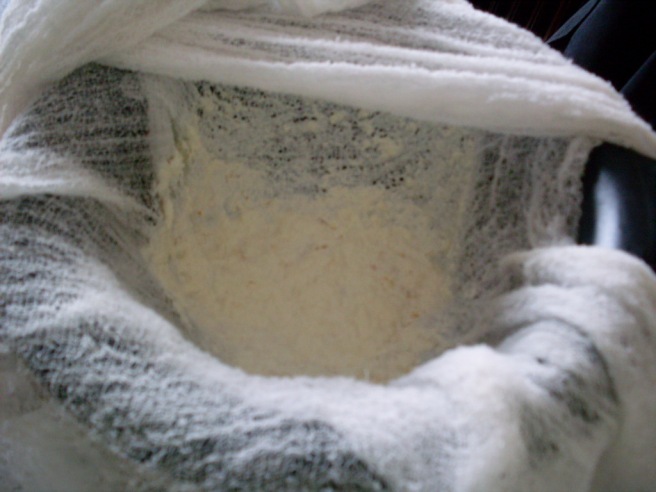 Stir salt into mixture (still in cheesecloth), then knot around a cupboard door handle and allow to hang for two or three hours, until liquid no longer drips from cheese.

Press cheese (still in cheesecloth) between the bottoms of two small plates, the top plate weighted with a brick or a couple cans of beans, and refrigerate overnight.

If you’d rather go with store-bought ricotta, you’ll still want to drain the excess liquid out – strain about a cup of ricotta in a colander lined with cheesecloth, a clean (non-linty) dish towel, or some paper towel overnight in the fridge.

To make the buns, begin by pouring yeast into the bottom of a large bowl. In a saucepan, combine cream, honey, and butter, heating until butter has just begun to melt. Whisk to ensure that honey doesn’t stick to the bottom. Pour over yeast and allow to stand until yeast is frothy, about five minutes.

When yeast is frothy, whisk egg into the mix, then add flour gradually, forming a paste at first, ensuring it is well-combined every step of the way. Continue adding flour until a soft dough forms. Turn out onto a floured surface, dusting with additional flour as needed for kneading. Knead until dough becomes smooth and elastic, about five minutes.

Let stand in a lightly greased bowl covered in plastic wrap until doubled in size, about an hour. Lightly butter 12 muffin tins. Slice pressed/drained cheese into 12 equal pieces (about one tablespoon each).

Turn back out onto a floured surface and cut the dough in half. Cut each half into three equal pieces, and then cut each piece in two, so that you have 12 pieces. Stretch each piece out in your palm, pressing a piece of cheese into the centre and folding the edges of the dough around the cheese, pinching the opening closed at the top.

Drop each bun into a muffin tin, and cover the whole thing with plastic. Allow to rise again, until doubled (ish), another hour.

Preheat oven to 375°F. Remove plastic from buns, pinch closed any buns that have opened, and stuff the whole thing in the oven, for 18 to 20 minutes, or until golden on the tops and fragrant all over.

Serve warm, possibly for brunch, definitely with something delicious, like breakfast cocktails. The buns are lightly sweet, and very buttery, flaky and soft in the centre. So, maybe a cava and orange juice would be ideal? I’ll leave that part to you.

3 thoughts on “Mexico, St. Lorenzo, and some brunchy buns that belong to both.”

No-waste apple bread pudding set to a soundtrack of small boys yelling into headsets about Fortnite. Yeet yeet yeet, bro.
It’s been a long week so I bought myself some joy. @seafoodcity_granville_island clams in a @parallel49beer/garlic/sambal broth, and @cobs.bread.main baguette. Trying to support my favourite locals via delivery and also TREAT MYSELF. I’m wearing pants I’m not convinced aren’t maternity pants.
Is it Friday? Does it matter? #boterkoek for breakfast, because it is a sturdy cake you can hold in your hand while you stare blankly out the window for as long as you need. #DutchFeast #koffeetijd
20 minutes + cupboard stuff = dinner. #pastaececi
Vegetables and a lecture on Minecraft that no one can escape from.
Sorry, I just can’t get video calling to work, not sure why.