And it did help, a little, the chicken noodle soup. It’s too early to know whether it will come back to surprise me again later.

It’s been a fun couple of days – yesterday I was really excited because I was going to come straight home from work and make a mofongo with poached eggs and avocado salsa, but midway through the day I broke my molar in half on some candy at the office. I rushed out to the suburbs, where my dentist could see me last-minute. I have a silver tooth now, in the back. It’s very shiny.

So I didn’t get my mofongo, because I was only allowed to eat soup or oatmeal, soft, non-chewing foods, so we had soup. And then, about 10:30 that night, after Nick had been a puke monster for a number of hours already, the sickness took hold of me as well. It’s not swine flu, I don’t think, because I don’t smell bacon, but it’s unpleasant nevertheless. So, I didn’t get my mofongo again.

I feel like a Pepto Bismol ad. If the Pepto Bismol was spiked with laxatives and poison. And if the cameraman was beating my face with a hammer.

I mulled some wine and took some pills and made some chicken noodle soup, so hopefully I’ll survive the night. Here’s the recipe. It’s just exactly what you’ll need when you feel like I do, and, if we’ve been in contact recently, you’ll probably feel like I do soon enough.

In a medium pot, heat olive oil and add chicken, onions, and garlic, browning lightly. Add in about six cups of water, and the leek tops, the thyme, the bay leaves, and the salt. Bring to a boil, and then reduce heat to medium-low and simmer, uncovered, for 25 minutes.

Remove chicken from pot and set aside to cool. Put pot in fridge, uncovered, and let cool for about 30 minutes.

In a large pot, heat 2 tsp. olive oil, and stir in carrots, celery, and leek until sweaty and glistening. You know, like you there with that fever. I know chicken soup might not be the best thing to help break a fever, but no one ever felt better eating cold chicken soup, and the Slurpee machine at the gas station is no longer operating.

Shred the chicken, disposing of the skin and bones.

Skim the fat off the top of the stock, and strain into a measuring cup. You’ll probably need to do this a few times – you should have about six cups of stock. Add the stock to the sweaty vegetables. If you’re shy of six cups, you can use store-bought stock to make up the difference, but water is also fine. Stir in your lemon juice, and bring to a boil. Add your noodles and chicken, and boil for five to six minutes, until veggies and noodles are tender. Adjust your seasonings – I added another few teaspoons of salt.

Serve with crackers and ginger ale while you watch Star Trek, sweating in your underpants.

Feel better. Don’t die. Also, this recipe makes a lot of soup so if you do end up losing most of it during the night, you’ll have leftovers for the next day, when hopefully you can keep down sustenance. 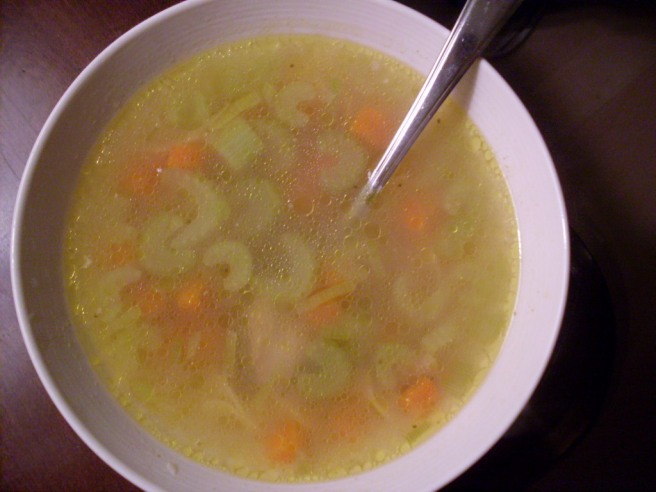