Every couple minutes, the lid on another jar pops and seals and my heart fills with joy. Now the only concern is whether or not the jam will set, because I got too excited and misread the recipe, and then when I went back and reread it I was all, “that can’t be right,” and even though I didn’t really know what I was doing I scoffed and decided I could do better … but the leftovers are firming up nicely so hopefully that’s a good sign. I now have eight jars of raspberry jam, and there aren’t enough exclamation points in the world to convey how excited – no – how ebullient I now am. Ebullient means enthusiastic or BUBBLING OVER WITH JOY, all caps. I know you probably know that, but I had to look it up to double check and it’s my job to know words like that, so, you know. Anyway. It’s like when you figure out how to do something you used to think was impossible, like merging onto the highway, only it turns out you can totally do it and then you’re just so full of pep that you can’t stop beaming or asking for high-fives. Except better, because I still don’t really know how to merge onto the highway without braking.

Like I said, I’ve never really done this before. I’ve hovered close by while my mom canned things or pickled stuff or turned fruit into jam, and I watched my grandmother from the stool I’d perch on across the counter top on the other side of the kitchen, but I never really got all that helpful over it. I think that’s because the last time I saw either of them can anything I was much smaller and far more likely to drop hot things all over myself and everyone. I think it’s also quite a pain in the ass, this canning business, and so after a certain point I suspect it became more trouble than it’s worth. And the mess gets everywhere, and it’s sticky.

The recipe I used comes from The Complete Book of Small-Batch Preserving via Epicurious, but I didn’t really read it all that closely and it turns out my way was way better, because if you follow this recipe, I think you’d end up with not very many jars of cloying red plonk. I’ll give you the recipe I thought I was using, but you may want to follow Epicurious’ Procedure for Shorter Time Processing because I am not very helpful as far as the technical stuff. There’s molten raspberry goo running down the side of my fridge.

Preheat oven to 250°F. Place sugar in a pan in the oven, and bake for 15 minutes. Apparently sugar dissolves much quicker in the raspberry mixture when it is warm. This is true. The sugar disappeared in no time. Literally, seconds.

Put raspberries and lemon juice into a large stainless steel pot. Bring to a full boil over high heat, mashing berries with a potato masher as they heat. Boil for one minute, stirring constantly. Once the sugar is good and warmed, add it to the pot. It will stop boiling for a minute or two, but let it come back up to a boil. The recipe said that it should only take five minutes to form a gel, but I think that’s based on not nearly as many berries and way more sugar (by volume) than I used, so I boiled the berries in the pot for closer to ten minutes. To test whether the jam was thickening, and it’s hard to tell when it’s at a full-rolling boil, I took a small spoonful of jam and stuck it in the fridge for two to three minutes. If it was thick enough when it was cool, then that was good enough for me.

When satisfied that it’s thick enough, spoon the jam into your prepared jars – I used eight small jars of varying sizes, which held between one and two cups each. The recipe should make 10 one-cup jars.

The result was a jam that tasted like raspberries, not too sweet. There was just a tiny bit left over, and I ate it all with a spoon, and it was as bright and cheery as the fresh berries were, which is pleasing because it means that we’ll get to taste summer all year long. The best thing about this recipe is that it doesn’t make way too many jars that you’ll eventually throw out, and it’s manageable enough that you can make it on a tiny apartment stove (mine has only one large burner – the other three are the little kind, which makes it just slightly larger than the stove you get in those awesome plastic Fisher Price kitchens). 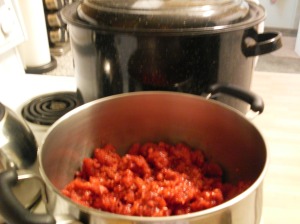 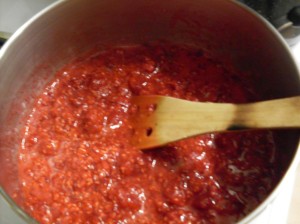 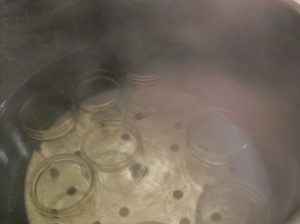 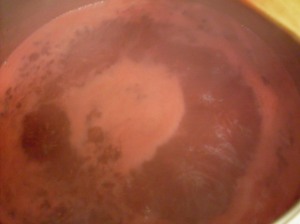 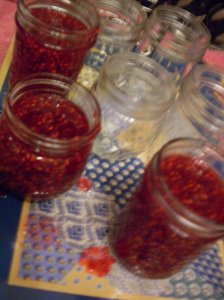 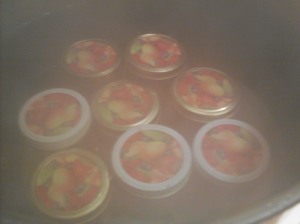 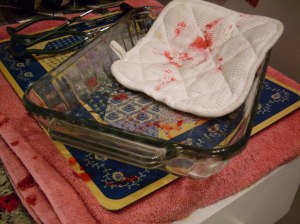 By now, all eight lids have made their happy little popping noise, so barring a disaster or something, they should all be sealed. Now we wait – apparently I am to test these in 24 hours to be sure that they’ve sealed tightly. So think happy thoughts for my eight little jars. Tomorrow, or possibly the next day because I’m now out of jars and lids and everything, the challenge will be red currant jelly, which will be a different kind of experiment and though I haven’t decided if it’s going to be spicy habañero red currant jelly, plain-old regular red currant jelly, or something else, I think it’s going to be fun – I’ll tell you all about it very soon. It’s kind of like being an Iron Chef in your own kitchen, which is better because you always win and if you’re lucky you can still get someone else to clean up.