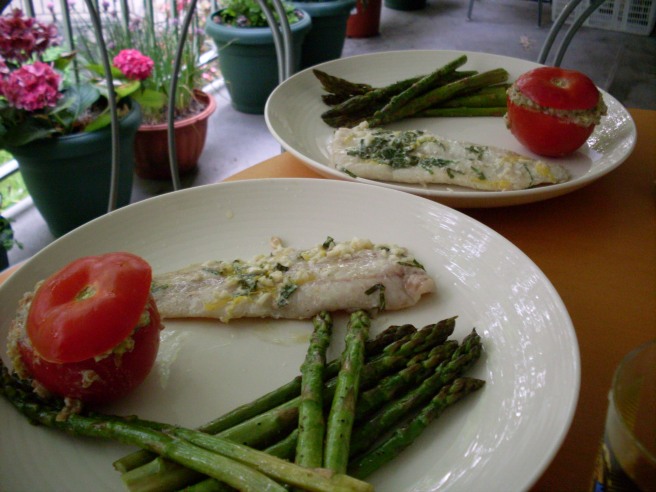 Today we were supposed to have pork tenderloin again, something we eat a lot of during the week because it’s so quick and easy. But then yesterday we were at Nick’s sister Sharon’s place, and she handed me a bag of blue cod, because apparently she was the only one at her house who would eat fish tacos so she ended up stuck with a bunch of fish she had no use for. Cue the thirty-year-old man-child giggles over fish tacos, and I end up with a few free fishies and an awesome plan.

A few weeks ago, I stumbled across a jar of grape leaves at the market and got all excited – I was going to make dolmades, which are pretty much just Greek meatballs wrapped in briny leaves. And then I forgot. And then I got fish. So I decided that today was a day for white fish and lemon zest and garlic and basil and just a dribble of olive oil, and pretending that we’re anywhere but here. Odd how the heat here is unbearable, but if I were mostly naked and being slathered in oil on some Mediterrannean shore by someone named Nikolas or whatever Greek men are called, it would be infinitely easier to endure. Here, I suffer the heat and Canadian Nicholas and his ongoing love affair with Game Cube Zelda, which he has played for hours and hours, for days on end. He is less Greek than anyone else alive.

“You’ve never seen a real game binge yet,” he says. He is going to wake up to find that a terrible fate has befallen his thumbs. And I will be all kinds of surprised.

I had grape leaves. 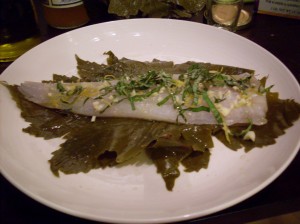 I can’t tell you how many leaves you will need, because it depends entirely on the shape and size of your fillet. I needed five, because the grape leaves varied in size. You may need more, or less, but fortunately you get quite a lot in a jar.

I topped the fish, which was not frozen, with a little bit of lemon zest, some chopped garlic (perhaps too much), some fresh chopped basil, and just a taste of olive oil. A little black pepper, but no salt. The grape leaves are salty enough, so salt once you’ve tasted the finished product. You can’t unsalt a thing.

Wrap the fish in the leaves, covering it completely.

Drizzle the packet in oil, both sides. Then place it on the barbecue or in a pan on the stove. Three minutes per side over medium heat should be more than enough – less if you have a very thin piece, more if you are working with a big thick chunk.

Serve with a drizzle of lemon, with fresh vegetables on the side. I chose asparagus, because I always forget that I’ve bought asparagus and wind up with way too much at any given time. I also made a stuffed tomato salad out of a little chopped tomato innards, some grated cucumber, yogurt, a handful of cooked bulgur (which I have on hand because it makes excellent, filling salads for work lunches), a pinch of fresh garlic, and some mint. Very refreshing, and just enough for a day where the air is still heavy with heat and the clouds have started to roll in and make things muggy. 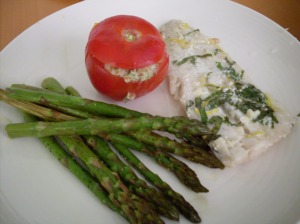 It’s started to cool off though, so tonight I will make muffins. If they go as well as I think they will, I will report back tomorrow. In the meantime, I have to go make fun of a 27-year-old boy who’s imagining himself a trotting, dragon-slaying dork elf. This could happen to you: