Raising a small person in an apartment is not without its challenges; among these are a lack of space to really run. Not that there is any lack of running. Most of our walls are scuffed and dinged as Toddler doesn’t corner well and doesn’t always think to brace himself for a fall (and is often holding something blunt, sticky or staining). We’ve decided there’s no point trying to clean this place up until he’s in school. Everything smells like peanut butter. All our upholstery is crisp with dried yogurt.

Nick and I both grew up in the suburbs where there were always yards to play in and you could play outside mostly unsupervised. My parents built me a pink and white play-house in their back yard where I’d host imaginary dinner parties and punch my sister in secret, and Nick’s parents had a trampoline. We grew up in much bigger spaces. But there are drawbacks to suburban living as well, and since we’re determined to stay in a city where the cost of housing is almost laughably out of reach for any normal person, Toddler will remain yardless for the foreseeable future.

So we spend the couple of hours we get between the end of the workday and Toddler’s bedtime outside, running and roaming the local parks. He seems to enjoy it, and as his language develops we get to spend that time actually hearing about his day. (I say “actually” because this is a fairly new development. We’re getting sentences now, like “Quinn and I play camping,” or “No but I need a treat.”) 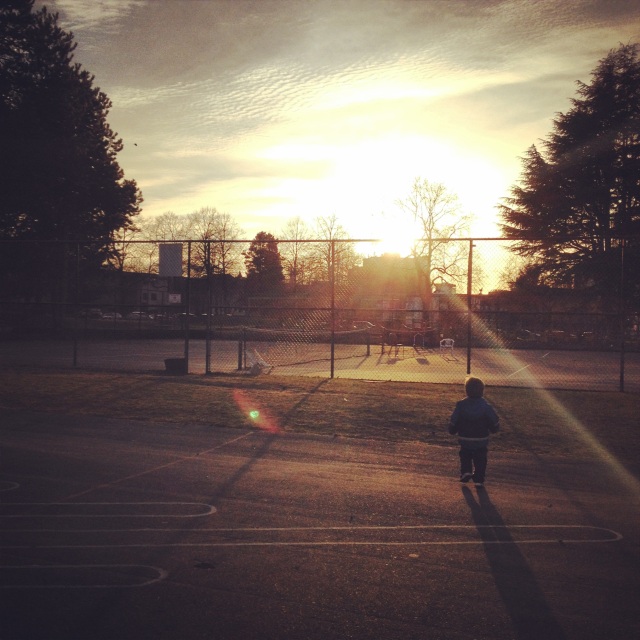 This has meant that dinner has been rescheduled; we frequently rely on the Crock Pot, or have simple dinners that we can prepare quickly after bedtime. Often, I do the dinner prep when I get home from work, and the cooking much later. Such was the case with the recipe that follows.

This one comes out of my unrelenting desire for fried chicken, drumsticks being on sale at the right time, and a combination of laziness and cheapness that I think has come to comprise my personal brand. I needed fried chicken urgently, as you do. But a buttermilk brine was out of the question – there was simply no time.

So, with a vague recollection of something I saw on the Food Network one time when there was nothing else on and we’d run out of movies we could both agree on, I put the chicken in a bag with some mustard and hoped for the best. 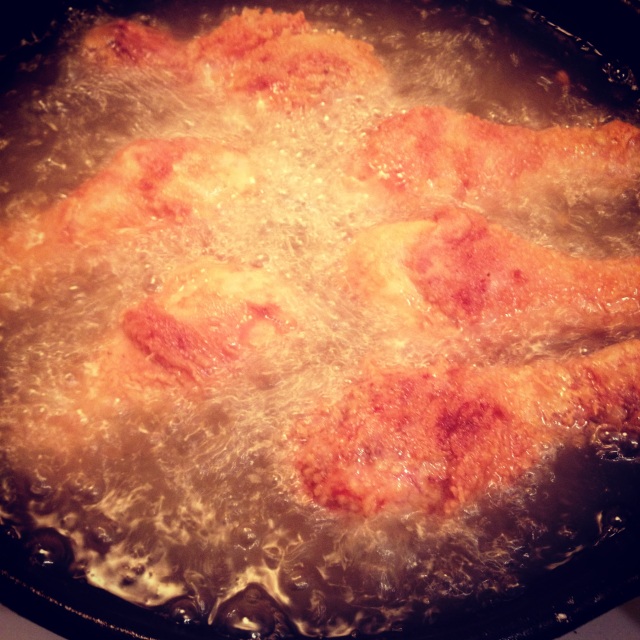 It would probably be even better with a longer marinate; I did it for an hour and a bit, and it was still very flavourful. The mustard (plus salt) works the way that buttermilk does, as it’s acidic and tenderizes the meat while flavouring it at the same time. But because it’s such a strong flavour, it does it in a lot less time. I think this one’s a keeper. 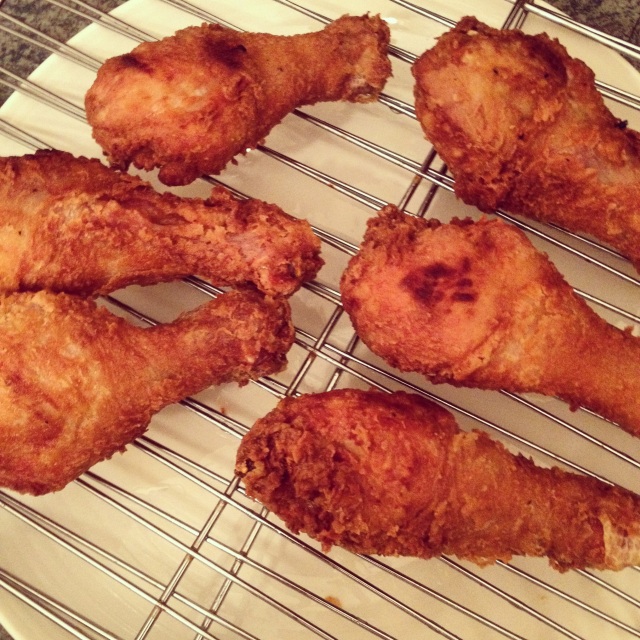 Put six chicken legs in a plastic bag. Splurtch the mustard and sprinkle about a teaspoon of salt over the chicken. Mush the chicken and mustard and salt together in the bag, and let them sit for maybe an hour.

Pour an inch of peanut, vegetable or canola oil into a cast-iron or otherwise heavy pan. Heat the oil to about 350°F.

In another bag, combine the flour, remaining salt, and pepper. Mix well. Remove the chicken from the first bag in to this second bag. With one hand holding the bag closed, shake the chicken as if it’s 1993 and you’re making Shake ‘n Bake.

Place the chicken in the hot oil and cook until crisp and golden on one side (about four minutes), then turn the legs over and cook another four or five minutes, until cooked through.

Drain the chicken on a wire rack (position it over a plate for easy clean-up) for five minutes. Drizzle lightly with honey, and serve hot. 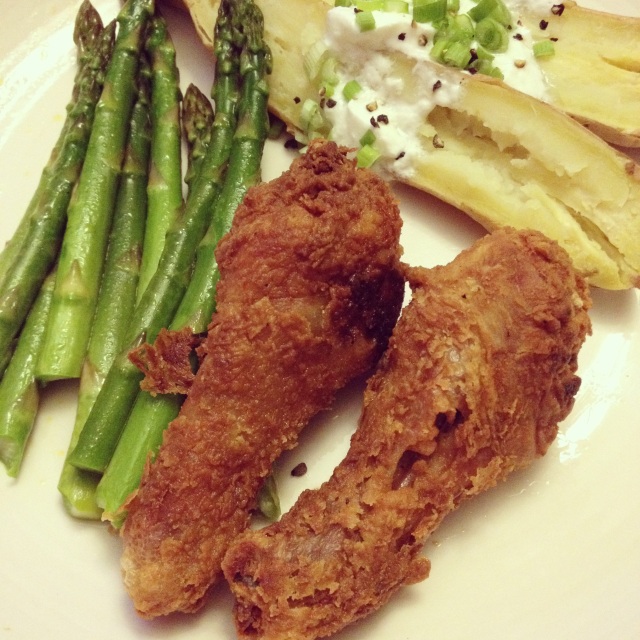 Oh! I forgot to mention. I joined Instagram – if you’re there too, let’s connect!